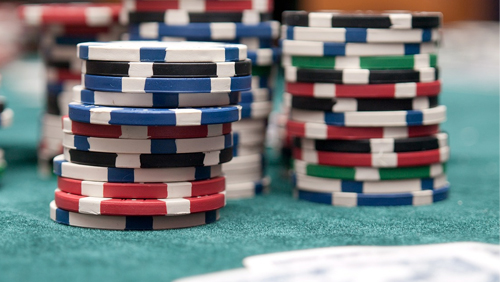 It’s hard to argue with the fact that Adrian Mateos is one of the world’s best tournament poker players. With over $21 million in live tournament winnings and an online career to be just as awe-struck by, Mateos added to his impressive poker resume with his latest victory, the 4th WCOOP title of his career.

Winning $543,686 for finishing top of the payouts list, Mateos had some incredibly good players to battle through to claim the victory.

The guaranteed prizepool of $2.5 million was exceeded by an extra $99,650 as 71 players (plus 35 re-entries) made up the money on offer to those who finished in the money. Mateos was one of those who re-entered, paying $50,000 to take part rather than $25,000 but after turning that into half a million dollars, he’ll be delighted with his performance.

Just 13 players took to their seats as the final day begun, but it didn’t take long for the bust-outs to begin. Laszlo Bujtas was taken out by Australian player Kahle Burns after his pocket aces were easily enough to bust Bujtas with nines. Just a couple of hands later, the field was reduced to 11 players when Daris Pedes was taken out by Russian Wiktor Malinowski.

Chris ‘Bug Huni’ Hunichen busted in 9th place when his final 15 big blinds went into the middle only to run into Adrian Mateos’ pocket aces, which held to further trim the number of opponents ‘The Matador’ would need to evade. Artur Martirosian busted in 8th place, before Finnish player Pauli Ayras left in 7th place, the first player to cash for a six-figure score, with $122,696 going into his profit column.

While Malinowski had been one of the aggressors at the final table, his call of Kahle Burns’ all-in proved to be his undoing. Malinowski even flopped a set to improve his pre-flop hand of a pair of sevens but Burns rivered a straight to get there and bring play down to a final five, and when ‘tzuzteutezu’ busted in 5th place, just four men remained in the hunt.

Aussie hotshot Burns lost his chance for a WCOOP title when he flopped top pair and called Mateos’ all-in with pocket aces. At that point, there was the chance of a deal, but discussions between Mateos, Fedor Holz and eventual 3rd-place finisher Luke Reeves, who ace-jack couldn’t hit. Holz took those chips into the heads-up duel, and, having won his second WSOP bracelet just a day earlier, could smell the chance of back-to-back major titles.

Adrian Mateos wasn’t going to budge, however. After winning the first hand of heads-up, the stacks were almost even and a deal was agreed between the two men. After the deal was done, both players had the lead, but Mateos took a big step towards victory when he made a flush to reduce Holz’s stack to just 12 big blinds.

Dwindling further to less than 10 big blinds, Holz moved all-in with king-nine, but Mateos had the easiest call of the heads-up battle with ace-king, and an ace on the flop, followed by another on the turn ended the event in the Spanish player’s favour.

With Mateos reaching four WCOOP titles, he puts himself in an exclusive club, alongside other legends of the game such as Andrey Zaichenko, Dzmitry Urbanovich, Gleb Tremzin and Joao Vieira, with only Dan Kelly (5), Shaun Deeb (8) and Denis Strebkov (9) ahead of him.

Mateos, perhaps most ominously, is just 26 years old, with plenty of time to break records as he rises up and up the rankings.