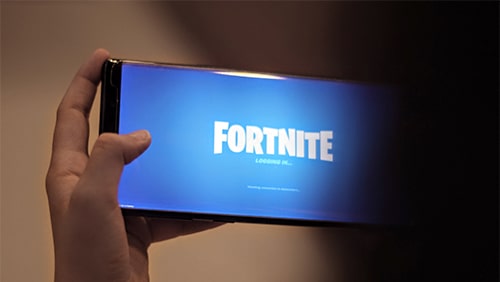 A battle to the death that should be taking place on an island between 100 players is about to go down between three technological business giants. Epic Games is at war with Apple and Google Play.

Unlike Fortnite, the 100-player ‘Battle Royale’ game which has become one of the world’s most popular games in history, this fight between three global superpowers doesn’t feel like it’s taking place on a level playing field, as all Fortnite games start.

A battle to the death that should be taking place on an island between 100 players is about to go down between three technological business giants. Epic Games is at war with Apple and Google Play. The battleground is profit and after reducing prices for their players and building a new Epic Games Store function let players save 20% on all purchases in a bid to permanently reduce the cost of in-game purchases, Fortnite updates for the next season are being blocked by Apple and Google Store.

Why are they doing it? Their monopoly of the App Store earns them 30% of the money from in-game purchases and they aren’t willing to move on that. With Epic Games offering the reduction, Apple and Google play are both threatening to block the update that takes place in nine days’ time.

It’s easy to look at the actions of the App Store and Google Play Store and surmise that the two giants of industry are causing all the problems. After all, change their outlook on profit margin and the problem would be sold. But then, should Apple and Google not maintain their current profit margin? Well, maybe not.

These are extraordinary times and the 20% reduction across the board on in-app purchases by Epic is designed to save players money on all devices, not just iPhone for example. Any players on iOS have had to pay more than console gamers since Fortnite rocketed in popularity in 2018. Players should have to pay, but overpay if they use a specific device to enjoy the same game as their friends? It seems harsh.

What will the knock-on effect be for professional Esports Fortnite players such as Ninja, Tfue or LazarBeam? Well, we’ve seen how, in some instances of gamers taking the dollar that fans can reject that superstar no matter how big the name.

In poker, Daniel Negreanu angered fans when he declared that ‘more rake is better’ when on the PokerStars Team Pro roster. If Ninja, Tfue or LazarBeam come out in defence of Epic Games or Apple, then they’re pinning their colours to the mast of that company and could lose fans either way. It’s difficult to sit on the fence, however.

With Fortnite on a countdown to be blocked on the App Store, it’s looking extremely likely that iOS players will face a delay to being able to play the latest season of the hugely-popular game which is played by 250 million people worldwide.

While Epic Games have appealed for players to take to Twitter and use the hashtag #freeFortnite in the following video entertainingly depicting an evil overload as a rotten apple complete with wriggling worm accessory, lawsuits threatened for action could prove to be a battle no-one looks likely to be able to win.