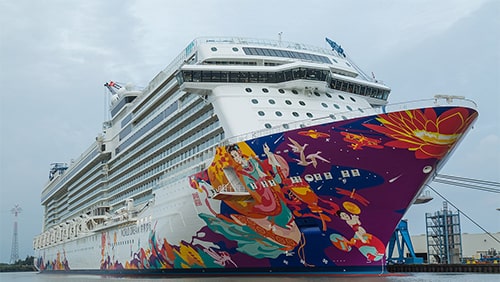 Genting Hong Kong (Genting HK) was well on its way to establishing a state-of-the-art fleet of gaming cruise ships when a huge storm appeared and rolled over the gaming operator’s plans. The storm, in this case, was the coronavirus, and Genting HK suddenly found itself facing an unprecedented situation. Its ships were forced to remain docked as travel restrictions began popping up across the globe and it was unable to launch the ships that were going to cover the huge financial investments that had been made over the past two years. With losses mounting, the tempest is swirling larger, and a whirlpool is starting to form that could suck the company in. Genting HK is already looking for ways to lighten its load, but faces huge challenges, punctuated by the fact that it has now announced that it won’t be able to make any payments on outstand debt for the time being.

Genting HK reportedly had around $3.37 billion in outstanding debt as of the end of July. In the three weeks since then, things haven’t improved any, and two of the company’s divisions already missed payments they were supposed to make to creditors this week. Between the two, both of which focus on the company’s ship-building activity, they were short 3.7 million ($4.3 million), and this is certain to have a ripple effect as other financial obligations are forced down the list.

In a filing (pdf) with the Hong Kong Stock Exchange, the company asserts that it won’t be able to make good on any of its financial obligations right now, and that it is working to arrange for alternative payment plans to cover its debt. It explained, in part, “In addition to the events of default that have already occurred under Global Finance Documents, the Board anticipates that the temporary suspension of all payments to the Group’s financial creditors will also likely result in events of default occurring under other finance documents of the Group. Such events of default would give rise to a right for requisite creditors of the Group to declare that the financial indebtedness owed to them are immediately due and payable.”

The company already tried to get in front of the storm when it took measures to reduce salaries and stop unnecessary spending this past March. However, as COVID-19 continues to circle overhead, losses continue to mount. The company said in its filing that it will “temporarily suspend all payments [its] financial creditors (including interest and charter payments)” in order to “preserve as much liquidity of the group as possible.”

In addition to its fleet of gaming ships and shipyards, Genting HK is also involved in Resorts World Manila in the Philippines, where it has a considerable investment. The current financial turmoil may impact that arrangement, and could even lead to a fire sale of its consideration in order to come up with some quick cash. However, the company has not weighed in publicly on what might happen with that investment as a result of the current situation.

What cash the company does have on hand will be used to cover the very basic expenses. However, the situation is becoming more critical by the day, especially considering that the losses continue to increase. According to a statement earlier this month, Genting HK indicated that it would see a financial shortfall of at least $600 million in the first half of the year, and this will only increase as 2020 moves forward, with no ability to get all vessels into the water.