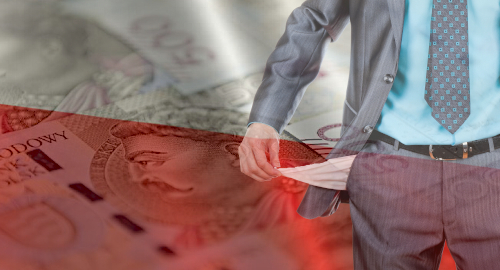 Poland’s government saw its gambling tax revenue take a serious hit from COVID-19, with the state-run online casino monopoly proving the exception to the downward trend.

The state-run numeric lotteries claimed the biggest slice of the tax pie with PLN176m, down 16.7% from Q1 2020. Sports betting claimed the second-biggest slice with PLN138.6m, down nearly one-third from Q1 as the pandemic forced the suspension of major sports events. Online betting tax fell 28% to PLN124m while retail betting slumped 55% to PLN14.6m.

Land-based casino operations were also hit hard, with tax down 52% to PLN44.6m, while slots parlor taxes were cut in half to PLN3.7m. Standing in stark contrast was state-run Totalizator Sportowy’s Playtech-powered online casino monopoly, which brought in tax of PLN39.3m, up more than 28% sequentially and more than twice the sum generated in Q2 2019.

Polish gambling industry advocates Graj Legalnie estimated that local bookmakers STS increased their share of Poland’s legal betting market to a dominant 50%, nearly five points higher than estimated at the close of 2019. The gains reportedly came at the expense of Fortuna Entertainment, which slipped seven points to 25% while Forbet improved one point to 7%.

Poland’s locally regulated online gambling market has never really lived up to its potential, based largely on two main issues: the punitive 12% tax on sports betting turnover, and the fact that there’s no competition for the online slots and table games on Totalizator Sportowy’s Total Casino site.

But even Total Casino doesn’t offer online poker, a fact that prompted local economist Sławomir Mentzen to publicly complain that Poland’s gambling laws are “absurd.” Mentzen noted that Ukraine recently approved legislation to authorize both land-based and online poker, and expressed frustration that Poland had “no rational reason to maintain such a restrictive law and forbid people of this kind of entertainment.”