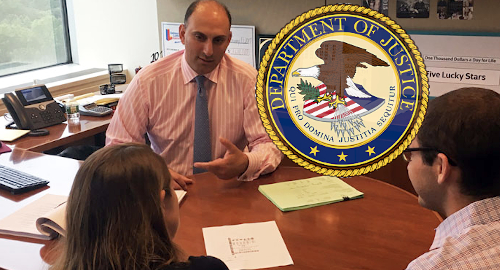 A self-proclaimed ‘Lottery Lawyer’ has been indicted for defrauding US lottery winners out of $107m with the help of a some alleged mob associates.

On Tuesday, the US Attorney’s Office for the Eastern District of New York announced the indictment of Jason ‘Jay’ Kurland, Christopher Chierchio, Francis Smookler and Frangesco Russo on charges of wire fraud, money laundering and conspiracy.

Kurland’s New York law firm represented lottery winners with total winnings of around $3b, advising them on how to safely invest their windfalls. In reality, Kurland steered his clients’ cash into entities and deals controlled and directed by his co-accused, for which he received kickbacks that weren’t disclosed to his lottery clients.

Kurland (pictured) would occasionally funnel a portion of his clients’ funds back to them as ‘interest payments’ on their investments although the bulk of the ‘invested’ funds were ultimately lost. Much of it went to fund the defendants’ lavish lifestyles, including private jets, luxury vehicles, two yachts and pricey vacations.

The DOJ seized 13 bank accounts associated with the scam and placed liens on three properties the defendants allegedly purchased with stolen funds. None of the defendants were identified in the indictment, although the DOJ said they included the winners of a $1.5b Mega Millions jackpot, a $245m Powerball prize and a $150m jackpot.

In 2016, Kurland gave an interview to Vice in which he said he first got involved with assisting lottery winners when a guy who worked for one of Kurland’s clients won “a large jackpot in Connecticut and wasn’t sure where to go.” The ensuing publicity led to a $300m winner in Rhode Island calling Kurland, after which Kurland said he “started getting call after call dealing with every kind of lottery issue.”

Kurland added that he told winners that “your attorney should be the bad guy … the guy who says no” to individuals pitching winners on potential investments. Kurland noted that “a lot of these winners are not sophisticated enough to see” scams in the making.

Kurland’s co-defendants Smookler and Russo were also charged with extortion for threatening to kill Gregory Altieri, a jewelry merchant who served as one of the defendants’ dodgy investments. The pair gave Altieri a $250k ‘street loan’ then threatened the jeweler that they would “pop your head off in front of your f**king kids” and “rip your son’s teeth out of his mouth” if Altieri couldn’t repay $400k for the loan.