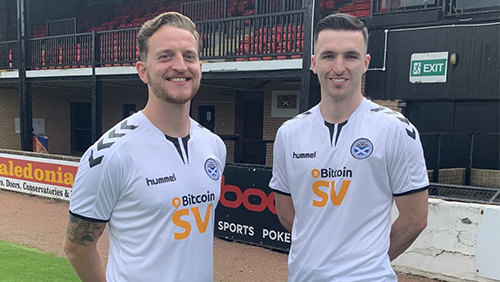 Scottish team Ayr United continued their preparation for the 2020/21 season, unveiling new signings. The Honest Men have been active in the transfer market, making a play for former Inverness midfielder Tom Walsh and former Rovers right back Michael Miller.

Troon native Walsh was excited to sign a one-year deal as he looks to make his mark on the Championship for the upcoming 2020/21 season.

Walsh spoke told the Ayrshire Post that he was seeking a new challenge in the Championship, after the stint at Inverness. “It’s a fantastic move for me,” Walsh said. “I really enjoyed my time at Inverness and probably played some of my best football up there. But I made the decision that going forward, I needed a new challenge. I turned down my offer of a deal to stay at Inverness because I wanted to see what was out there for me.”

“Coming back so close to home will be ideal for me and hopefully I’ll see the benefit of that,” he added. “When I spoke to the manager here, I really liked what he had to say. I can’t wait to play under him.”

Former Celtic junior Michael Miller, will be hoping to repay the faith shown in by Ayr United Manager Mark Kerr. The 25-year old became the fourth signing of the season, having made 26 appearances for Raith Rovers last season. The talented right back is happy for another opportunity in the Championship, after a knee injury left him with an extended stint on the sidelines.

Kerr told local media he jumped at the opportunity to sign for Ayr United, once he heard of Kerr’s interest. “As soon as I heard of the interest from Ayr and the manager, I wanted to come here,” he said. “Having played against him a few times down the years – and seeing what has happened at the club in recent times – it’s a place you want to be. They are clearly making good progress and I want to be a part of that.”

“It looks like it’s going to be another very competitive season in the Championship so I can’t wait to get started and play my part. I can obviously play several positions across the back or in midfield, which helps, but I definitely see myself as more of a sitting midfielder,” he added.

The versatile style of Ayr United flows off the pitch with their primary shirt sponsor Bitcoin SV (BSV). BSV, thanks to its massively scaling blocksize, offers consistently low fees and the capability for enterprise to upgrade their tech stack for the new world of blockchain. BSV is proudly supported by Calvin Ayre, who has been a major supporter for Ayr United over the last decade.