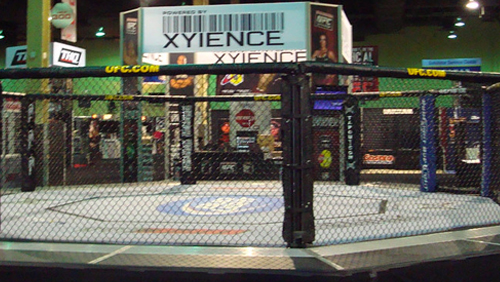 What do you get if you bring the Ultimate Fighting Championship (UFC) together with the Peacekeeper Elite League? Strategic partners, of course.

Yes, one of the most surprising collaborations since Paul McCartney and Stevie Wonder made Ebony and Ivory, the Chinese mobile Peacekeeper Elite League has joined forces with the mixed martial arts sport that sells seats for millions around the world with stars like Conor McGregor becoming millionaires for being prepared to fight in the ultimate way.

The modified version of PUBG, the celebrated Battle Royale game entitled – rather ironically ‘Game for Peace’ in China, will be an odd bedfellow for the UFC brand. The Peacekeeper Elite League (PEL) hasn’t gone down the route of other strategic partnerships, either. Usually at this point, we’d let you know the immediate plans that both sides of the deal look forward t pushing through. It’s like a political coalition, except in Esports.

In this case, however, the PEL merely states that “the two parties will carry out in-depth cooperation in multiple dimensions and innovatively inject sports genes into esports events”.

So far, so vague.

The PEL is sure to appeal to plenty of players as it kicks off its second season in 2020, with much of the world in lockdown from the season’s opening to its conclusion on August 23rd. Game for Peace hasn’t only collaborated with UFC, however, with automobile manufacturer Tesla lending its inimitable energy to the brand and ice cream giant Häagen-Dazs happy to invest and chill, too.

PUBG, a.k.a. Game for Peace is sure to grow and grow in China, especially in the next month. The UFC, which has obviously had its live shows seriously truncated by the global COVID-19 pandemic, could be an ideal, if ironic partner to align with Game for Peace.

With Esports growing in recent months, this is an interesting move from a Chinese company previously not so well connected with live sports, and certainly straying from one that attracts attention for violence. The PEL and Game for Peace has been modified specifically to fit in with stringent Chinese rules when it comes to gameplay and that the UFC would be happy to partner with the mobile brand surely shows that they also respect the wishes of the Peacekeeper Elite League too.

Stay tuned on his exciting partnership as the potential for Esports and live sports crossovers continues into the next year, whatever the global health situation.