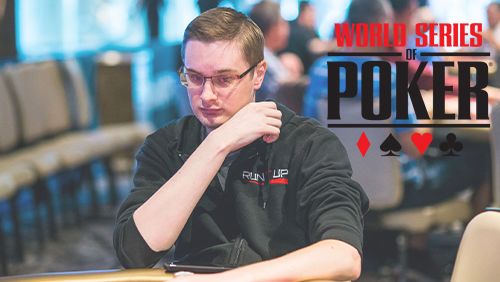 Two more WSOP bracelets were awarded to Kenny Huynh and Kevin Gerhart over the last two days as one of the most talented poker players in online history had a near-miss to remember.

The fabled bracelet ceremonies of years past have, unfortunately, been put on hold this year as the World Series of Poker has headed online and denied many the chance to celebrate with their friends as they achieve a lifetime ambition.

That didn’t stop Matt Bode enjoying an ‘unwrapping video’ for his WSOP bracelet when it arrived via FedEx, however, as the World Series were happy to share on Twitter:

It was Kenny Huynh who won the 19th WSOP bracelet of the World Series, where 2,545 entries created a prizepool of just under a million bucks at $916,200. Huynh won $133,856 for his efforts in outlasting that field and is closing in on a million dollars in winnings across live and online events in his career after winning the vital heads-up against Matthew Berger.

There were near-misses for Mike ‘The Mouth’ Matusow (88th), Matt Berkey (75th), Ryan Riess (70th) and William Klevitz (11th) along the way, but Huynh got the job done in style, coming back from a chip deficit when just the final two remained to triumph against the odds.

Kevin Gerhart captured his second WSOP bracelet at the expense of players like British poker crusher Chris Moorman at the final table of Event #20.

With 1,137 entries overall paying the $500 entry, it took 13 hours to find a winner, but when it came, it was an exciting end to the action. Gerhart, who won $97,571 for ending the tournament in 1st place, outlasted not only a field including some big names, such as Jamie Kerstetter (111th), Phil Hellmuth (95th), Event #12 winner Ryan Depaulo (51st), Shaun Deeb (36th) and even Connor Drinan, who once played the $1 million-entry Big One for One Drop only to lose with aces against aces, who busted in 11th place for $5,935.

At the final table, Chris Moorman, who was also shooting for his second WSOP bracelet, finished 4th for $28,601 as he was eliminated by the unstoppable Gerhart on route to his victory.

You can watch the final table stream of all the action right here as David Tuchman talks you through a dramatic ending to the Six-Max WSOP Event: