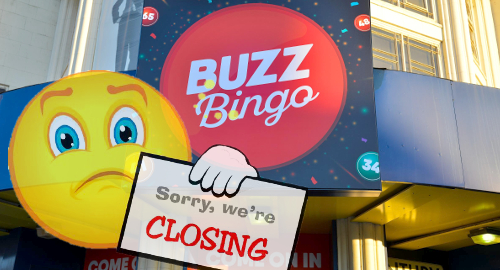 A major UK bingo operator is permanently shutting 26 retail venues due to pandemic uncertainty while UK casinos continue to press their government for the right to resume operations.

On Wednesday, Buzz Bingo announced that 26 of its 117 bingo venues wouldn’t be reopening when the other 91 halls reopen to the public on August 6. The sites, which previously operated under the Gala Bingo brand, were all shut on March 21 after the government ordered the closure of all non-essential retail operations to limit further COVID-19 transmission.

Around 573 jobs will disappear along with the 26 venues targeted for termination. The company said the decision was regrettable but necessary given the “unsustainable operating environment for the foreseeable future,” which includes not only social distancing requirements and capacity restrictions but also a general wariness among consumers, particularly older demos that patronize bingo halls.

UK casino operators have also yet to reopen their shuttered venues, despite betting shops having been cleared to reopen over one month ago. Matt Rudd, who manages the Grosvenor Casino in Broad Street, Birmingham, recently penned an op-ed for the Betting & Gaming Council (BGC) in which he said “the longer we remain closed, the more anxious I become.”

Rudd said he’d been fielding calls from customers who “also can’t understand” the government’s reluctance to give casinos the green light to reopen. Rudd claimed that a recent visit by “various government officials” to Grosvenor’s Rialto casino in London’s Leicester Square “went well, so I’ve got my fingers crossed that we receive some good news really soon.”

Scotland’s bookmakers recently received good news after their government agreed to lift what the BGC had called “draconian” COVID-19 restrictions – no chairs, live racing broadcasts or functional gaming machines – that were far tougher than what their English counterparts were required to impose as a condition for reopening.

The restrictions had allegedly contributed to a 95% decline in Scottish bookies’ betting turnover but the BGC reported late last week that the requirements will be reduced to a level comparable to England’s as of July 22. BGC CEO Michel Dugher celebrated the Scottish government’s decision, adding that betting shops could now do their bit to help “kickstart the economy.”