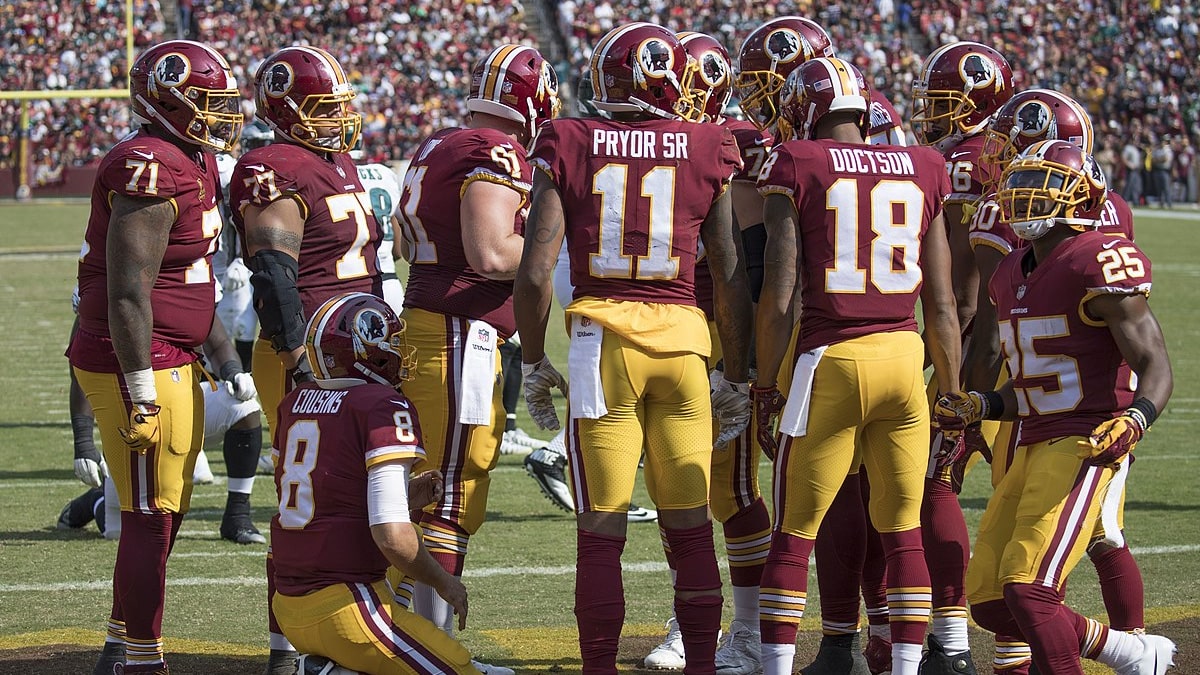 After 87 years of using the name, the Washington Redskins have finally gone ahead with the decision to drop their problematic team name and go with something new. News of the name change broke on July 13 after an internal review was conducted by the team (and years of protest from U.S. tribal activists), and the sports books are already taking wagers on what the new team name will be. Thanks to Bodog, we have a look at some of the more likely candidates.

The leading favorites, odds wise, are either the Washington Red Tails Or Washington Red Clouds, both currently sitting at +275. Both of these names would likely keep something close to the team’s color scheme, and each in their way would honor a piece of history. The Red Tails name was one of the nicknames for the Tuskegee Airmen, fighter pilots of World War 2, while Red Cloud was a Native American warrior who defeated U.S. army troops and burned down their forts. These are easy favorites, specially as the Red Tails won a rebrand contest and has the support of local legislators.

But if the public had much of a say in the matter, the Redskins name would have gone away years ago. So what does Dan Snyder Want? The next leading favorite in the odds are the Washington Warriors at +300. Snyder has previously tried to trademark the name, but couldn’t seal the deal.

Next in the odds are the Washington Presidents at +700, but it feels like a pretty unlikely name. The name brings plenty of potential gimmicks and some proud nostalgia to lean on, sure, but think of all the jokes they would invite. ‘He couldn’t make the catch, his hands were too small!’ or ‘He’s listed as questionable for the game with bone spurs.’ Not a fan.

After that comes the Washington Americans at +800. It’s a fine choice for a name, and avoids most controversy you could find with any other name. But it’s pretty boring, right?

Also pretty boring would be the Washington Monuments (+600), Washington Generals (+900), Washington Lincolns (+1200), Washington Senators (+1400) and Washington Founders (+1600). I mean, come on, the city already has the Nationals for baseball and the Capitals for hockey. We get it, it’s where all the government stuff happens, try to mix it up with your name!

Our personal favorites are the Washington Hogs (Or any Hog Variant) +850. Not only do they appropriately pay homage to the great offensive lines the team had in the 80s and 90s, but they set up a perfect animal counterpart to the Philadelphia Eagles. And if you’ve ever been to D.C, you know they have some really wonderful barbeque joints. Watching the Hogs lose (that’s not going to change, Snyder still owns the team) and then going for some ribs sounds like the perfect Sunday afternoon.

WHAT WILL BE THE OFFICIAL NAME OF THE WASHINGTON NFL TEAM FOR GAME 1 OF THE 2021 NFL REGULAR SEASON?