Joe West has, for years, been a controversial umpire in MLB. He has unparalleled experience in the league, but is also known as the umpire with the “second worst percentage of bad calls,” a description he earned from a study conducted by Boston University after the 2018 season. The 67-year-old head of the MLB Umpires Association (MLBUA) has called baseball games since 1976, has appeared on radio and TV (even picking up a role in the movie “The Naked Gun: From the Files of Police Squad!”), has released two country music albums and is never afraid to speak his mind. That latter trait is what has put him under the spotlight now, and it could be enough to end his career. According to West, who is at high risk for contracting COVID-19, people aren’t dying from the virus, and it’s just an excuse for hospitals to make money. 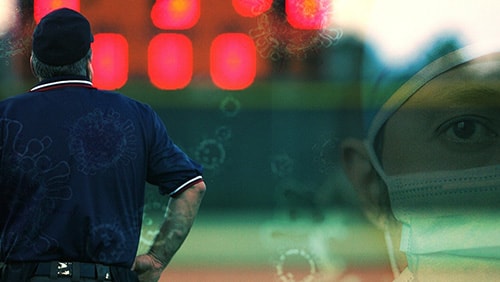 West’s comments were made to Bob Nightengale of USA Today. He asserted, “Those statistics aren’t accurate, I don’t care who’s counting them. When country music [singer] Joe Diffie died, they said he died of the coronavirus. He had Stage 4 lung cancer. The coronavirus may have accelerated his death, but let’s be realistic. Our system is so messed up they have emptied hospitals because there’s no elective surgery. The government has been giving these hospitals extra money if someone dies of the coronavirus. So, everybody that dies is because of coronavirus. I don’t care if you get hit by a car, it’s coronavirus.’’

Given that over 130,000 people have died from COVID-19, according to health statistics, the remarks didn’t go over well with virtually anyone except West’s closest friends. West has shown, on more than a few occasions, that his ability to provide proper scrutiny of baseball action has waned over the years, and this may be the proverbial nail in the coffin.

The MLBUA – the same organization West leads – has already issued a statement to separate itself from its leader, which is never a good sign. The entire release by the group, which didn’t mention West by name, was posted to Twitter by Fox Sports’ Ken Rosenthal, but one pertinent section reads, “Recent public comments about the current Coronavirus pandemic do not in any way reflect the position of the Major League Baseball Umpires Association. Our nation, and our world, has suffered greatly from this deadly virus. In the midst of continued suffering umpires are attempting to do our part to bring the great game of baseball back onto the field and into the homes of fans everywhere.”

There is growing doubt regarding whether or not MLB will be able to hold its truncated, 60-game season this year. If West had expected to be on the field, there’s an outside chance that his plans will need to be altered. While the league figures out what to do, if anything, it has already put plans in motion for the next season, releasing yesterday the schedule for 2021.

Provided no more surprises pop up, the 2021 season will get underway on April 1, 2021. All 30 teams in the league will play on that day, followed by six games on April 2 and 15 games on April 3. Currently, the plan is to hold a full regular season, which consists of 162 games.