Home / Sports / Will Dak Prescott dig in his spikes over Cowboys contract? 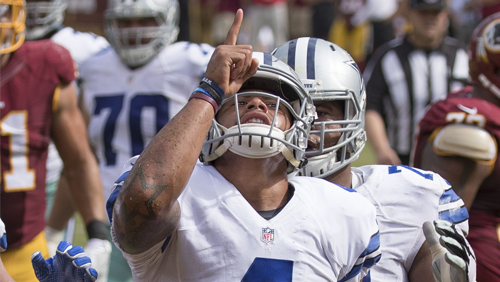 Dak Prescott is fourth favourite to be regular MVP of the 2020 NFL at 16/1 and a lot shorter to throw the most passing yards at a very attractive 13/2. He’s also the Dallas Cowboy contract rebel who might scupper their plans for a record-breaking NFL season.

The Dallas Cowboys are in with a real chance of winning Super Bowl 55, nestled into the betting market at 20/1 and with coach Mike McCarthy second favourite at 14/1 to win the NFL Coach of the Year award at the season’s close, it’s clear that the Cowboys have a lot going for them.

So why is Dak Prescott stalling on a contract offer?

The Dallas Cowboys have a lot of history and a bright future, but they have also existed in a recent period of change initiated by tough and some say uncompromising owner Jerry Jones. With recent coach Jason Garrett let go after 10 seasons at the club, their new manager McCarthy brings with him plenty of nous that is likely to help them come the season’s start.

Prescott has been offered a five-year deal but is stalling over it because he would rather sign up for a four-year deal. If that seems sniffy enough, imagine being offered $35 million a year and still turning it down. Jerry Jones wants him to sign on the dotted line for five years not four. It’s a stand-off, and it’s an all-American one.

Prescott – and by extension, the Cowboys – has until July 15th to make a decision, so the next week is a big one not just for the team but for other teams too. The Cowboys are said to be expecting to absorb losses of up to $800 million, a huge proportion of the $5.5 billion that the NFL is expected to be hit by if the NFL plays out in front of empty stadiums.

In an age where long-term deals do happen – and in the last 24 hours we’ve seen NFL Patrick Mahomes sign a 10-year contract with the Chiefs – Prescott isn’t being universally applauded for his call in terms of letting the decision draw out.

The salary cap at the Cowboys may be coming down, then, and in some ways, the Cowboys might not be advised to make the offer they have. Why would Prescott want four years rather than five in the current environment?

Dak Prescott is priceless in terms of his value to the Dallas Cowboys, but there is always a price that needs to be agreed. With time running out to make a deal and the famously immovable object of Jerry Jones in the way of the irresistible throwing arm of Dak Prescott, the quarterback who has been with the Cowboys since 2016 may be one of the strange contract situations of the summer.

We’ll find out in the next week or so what the future holds for the Dallas Cowboys, Dak Prescott and perhaps the 2020 NFL itself.