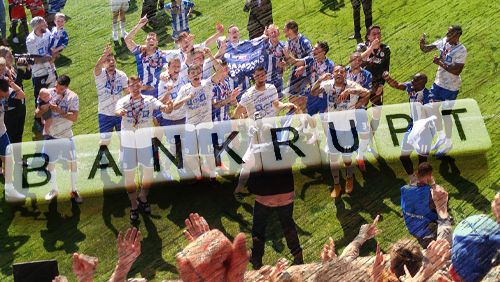 Covid has proven that sports organisations are like a house of cards: one wrong move and it can all come crashing down in a matter of days. Sadly, it’s the fans that suffer in the end when any sporting organisation goes bust. Wigan joined a long list of soccer clubs that have gone into administration. The club have been unable to cope with the financial impact of the Covid-19 and have been forced to put the club into administration, in a bid to guarantee their long-term survival.

Dean Watson, Gerald Krasner and Paul Stanley from Begbies Taylor have been appointed as joint administrators of Wigan. The administrators are determined to find a way to save the club.

What can you say to fans of Wigan Athletic? Only I suppose that football in the EFL operates on such thin safety margins that admin could happen to almost anyone. Another pointer to regulation if the game can’t save itself. Sorry, as ever, for supporters.

“Our immediate objectives are to ensure the club completes all its fixtures this season and to urgently find interested parties to save Wigan Athletic FC and the jobs of the people who work for the club,” the administrators wrote in a statement. “Obviously, the suspension of the Championship season due to COVID-19 has had a significant impact on the recent fortunes of the club. Wigan Athletic has been a focal point and source of pride for the town since 1932 and anyone interested in buying this historic sporting institution should contact the joint administrators directly.”

Wigan won the FA Cup for the first time in 2013, the same year they were in the Premier League. The club’s move into administration is a massive fall from grace, with a 12-point penalty the likely outcome from the English Football League.

The sanction from the English Football League comes into effect at the end of the season, if Wigan finishes outside the bottom three after 46 games. If Wigan finishes in the relegation zone, the penalty will apply to the 2020-21 season. The club have won all three matches since the resumption of the season and are eight points clear of the relegation zone, with six games left to play.

The club was sold by the previous owner David Whelan in 2018 to Hong Kong-based firm International Entertainment Corporation, who then moved the club into the hands of New Leader Fund in May 2019.

Administrator Paul Stanley confirmed that they have had little contact with the new owners.