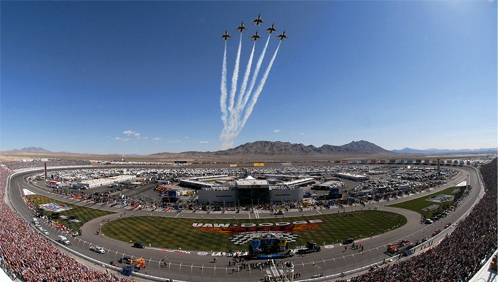 There are a few tracks on the NASCAR Cup Series that simply stand apart from the rest. One of those on the very short list is Indianapolis Motor Speedway, which of course is better known as the annual host of the open-wheel Indianapolis 500.

NASCAR first visited the famed Brickyard in 1994 and returns for its only visit this year on Sunday with the very uniquely named Big Machine Hand Sanitizer 400 Powered by Big Machine Records. It’s a 400-mile race on the 2.5-mile rectangular oval, meaning there will be 160 laps, and there will be no fans in attendance.

Big Machine Hand Sanitizer is an 80-percent alcohol antiseptic topical solution that obviously has become much more important during the pandemic and is from the same distillery that produces Big Machine Platinum Filtered Premium Vodka.

Indianapolis Motor Speedway is the third-oldest permanent automobile race track in the world and is now owned by Roger Penske’s corporation. This year’s Indianapolis 500 was shifted from its usual spot on the American Memorial Day weekend to Sunday, August 23, due to the coronavirus pandemic.

Retired Indiana native Jeff Gordon has won this race a record five times, with easily the most memorable being the first one in 1994 in front of more than 250,000 fans when it was called the Brickyard 400.

Defending champion Kevin Harvick is the +400 favorite to win here a third time – he also did in 2003. Last year, Harvick started from the pole and led five different times for 119 total laps. Harvick has seven top-five finishes at Indy (including those wins) and his average finish of 8.9 is not just the best among active drivers but the only one in single digits.

Joey Logano has the second-best average finish of 10.9 in his 11 races. He has four top-five finishes, including his second runner-up last year. Logano is +800 to win at Indy for the first time.

The only other active driver with multiple wins at Indianapolis is Kyle Busch, who took the checkered flag in 2015-16. Both those races extended past 160 laps. Busch is +500 this week after finishing 37th last year, bowing out after 87 laps due to engine trouble.