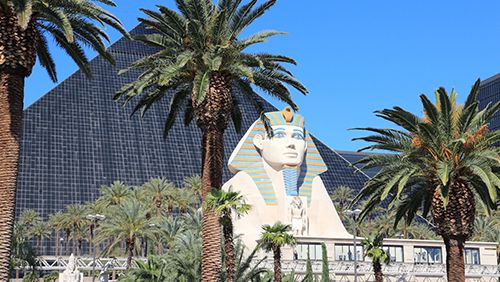 Las Vegas may be losing its iconic pyramid. The Luxor Resort & Casino, the MGM Resorts property that has been part of the Vegas landscape for more than two decades, might soon be demolished, paving the way for some new casino or, as Sin City evolves into more than just a gambling hub, some other type of property to attract tourists. The possible razing of the venue hasn’t been confirmed by MGM, but the source talking about the removal is known to have his fingers firmly placed on the pulse of the Las Vegas heartbeat.

Scott Roeben is behind Vital Vegas and is always providing updates on the state of affairs of the largest gambling city in the US. His comments and rumors are often right on the money, and he reports now that MGM brass is contemplating the possibility of erasing the Luxor permanently. He said on the Vital Vegas website, “Our sources say company officials have discussed demolition of both Luxor and Excalibur for at least five years, but have been unable to proceed due to union contracts. It’s possible the COVID-19 shutdown has paved the way for what’s to come for Luxor.”

The Luxor made its appearance in 1993 and quickly garnered a lot of attention. However, nothing lasts forever in Vegas, and the property, along with MGM’s Excalibur, has been considered for demolition for at least five years. Standing in the way were unionized employee contracts, but the coronavirus pandemic might provide the excuse needed to introduce drastic changes.

Demolition is more expensive than rebranding or upgrading; however, it’s hard to rebrand a property that is shaped like a pyramid. The Egyptian theme is embedded in the venue and, although MGM has provided updates over the years, once a pyramid, always a pyramid. While the real Egyptian pyramids have been able to withstand millennia of exposure, this isn’t the case for the Luxor, which is said to be suffering from structural issues. That concern was first raised a decade ago and the property still stands, but it might be time to permanently sunset the property and embrace a new Las Vegas.

Roeben posted about the possibility on Twitter, as well, and received a number of comments about the rumor. One came from Shawn Smallman, who doesn’t want the property removed. He stated, “If Las Vegas is to survive, maybe they need to get back to attracting families. I personally like both Luxor and Excalibur.” Another feels the rumor may not have any teeth and asserted, “Pretty sure this is b******t. It is highly unlikely MGM is in any hurry to dump billions into demolishing & constructing an entirely new replacement property after the Monte Carlo re-skin failure. Also I’m sure banks are just itching to fund a new casino project anytime soon.”

Rumor mills turn all the time and, unless there is an official word, they shouldn’t be approached with an open mind. Roeben has a good track record in Vegas, with eyes and ears all over the place, but Las Vegas is known as the city where anything can happen for a reason.