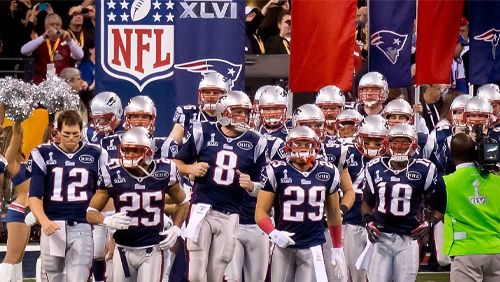 During last year’s NFL season, fans watching a game between the Cincinnati Bengals and the Cleveland Browns saw an unusual and confusing sight. In the Bengals’ press box, there appeared to be some extra bodies that normally shouldn’t be there. It turns out, the individuals were part of a TV team that provides coverage for the New England Patriots, and the fact that they were there filming the contest didn’t sit well with the league or fans. The Pats have now been handed down fresh penalties as a result of the team’s willingness to cheat.

The NFL, which has its hands full determining how to proceed with the upcoming season in the face of the coronavirus pandemic, last week took some time away from everything it has going on to discuss what to do to the Pats. It decided that the team needs to pay $1.1 million in fines, and forego a third-round draft pick in next year’s NFL Draft. In addition, the team’s TV crew won’t be permitted to cover any games for the 2020-21 season.

The Pats have a history of trying to see how far it can bend the rules and head coach Bill Belichick hasn’t been afraid to twist them completely into a pretzel. In 2007, the coach received a fine of $500,000 and the team one of $250,000 for what became known as Spygate. At the time, the Pats had reportedly videotaped defensive coaches for the New York Jets in one of the team’s earlier attempts to get an edge on the competition. While recording opponents’ activity lies somewhere in a grey area in NFL rules, the action is allowed under certain conditions. The NFL determined that the conditions hadn’t been met, and also withdrew the team’s first-round draft pick in the 2008 draft.

Then there was the time during the 2014 AFC Championship Game that then-quarterback Tom Brady purposely deflated footballs. That would go on to become known as Deflategate, and the Pats were fined $1 million and lost two draft picks in 2016 as a result. Brady, for his role, was suspended four games.

Brady has now moved to the Tampa Bay Buccaneers and it will be interesting to see how both the Bucs and the Pats do in the upcoming season, should it be played. To help them out, the Pats have recruited a new quarterback and, while it may seem like good news, only time will tell. The former QB of the Carolina Panthers, Cam Newton, has signed a one-year contract with the Pats worth $7.5 million. The extremely low salary is a reflection of what is expected out of Newton, who missed almost the entire season last year due to injury. The Bucs picked up two more QBs during the draft, so there’s enough talent behind center this season if Newton can’t perform.

Whether or not Newton gets the chance to prove himself remains to be seen. The Hall of Fame Game scheduled for August 6 was just canceled (delayed until August of next year – essentially the same as canceling it), and it’s possible that other changes to the season might be needed.