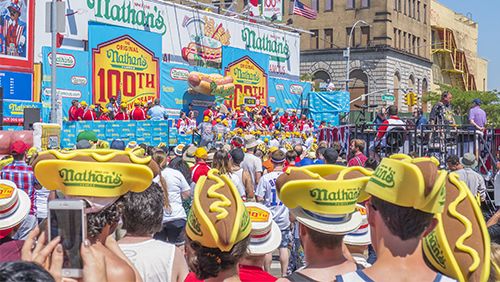 Hot dogs are an American tradition on the July 4 Independence holiday, and as part of that Nathan’s stages its famous Hot Dog Eating Contest every year on that day. The coronavirus has not canceled the 2020 contest, but like every other sport in the world it has forced changes. Saturday’s event will not take place in front of thousands of fans at the original Nathan’s location in Coney Island but instead indoors at a private location nearby with no fans in attendance.

How much of a sure thing is it that Joey Chestnut will win the 104th edition of the men’s Hot Dog Eating Contest? The Babe Ruth of competitive eating is -1600 to add another title with the entire men’s field priced +700.

Chestnut has won this contest every year but once since 2007 – he didn’t in 2015 when Chestnut ate only 60 hot dogs (slacker!) and lost by two to Matthew Stonie. Since then, Chestnut hasn’t eaten fewer than 70 with a record of 74 set in 2018. Believe it or not, Chestnut believes eating indoors with air conditioning and fewer competitors actually gives him a better chance of breaking that mark.

“I’m breaking the record this Fourth of July,” he said to various media recently. “If I’m feeling it, if I’m in the perfect rhythm, 77 is doable.”

The over/under total eaten by the men’s winner is 73.5, with both options at -120. Chestnut is given an over/under of 45.5 hot dogs eaten by the halfway point, which is five minutes in. The over is a -160 favorite. And he has an O/U of 9.5 hot dogs eaten in the first minute, with the over a -250 favorite. Needless to say, competitors eat fewer and fewer dogs the deeper into the competition.