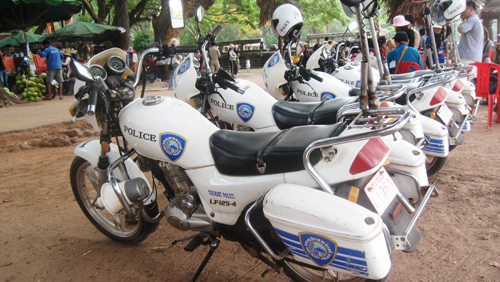 Online gambling is being ousted in Cambodia, but keeping up with gaming websites that pop up out of nowhere is a difficult task. A few operators recently departed the country abruptly, and renewed efforts on the part of Cambodia’s National Police to track down companies that operate illegally are gaining steam. However, it’s a difficult task that isn’t easy to complete, as new sites can emerge out of nowhere. Now, law enforcement and government bodies are beginning to work more closely together to crack down on online gambling.

Cambodia’s National Police chief, Neth Savoeun, has issued a directive to the Central Security Department (CSD) to go after online gambling operators in order to hold them accountable for breaking the law, according to the Phnom Penh Post. This past weekend, six new gaming websites appeared that have law enforcement and government officials scrambling to bring order to the online space. The police and the CSD are working with the Ministry of Posts and Telecommunications (MPT) to block the sites and figure out who’s behind them so they can be brought to justice. The sites include www.v89bet.com, www.ibc2888.com, www.sbc369.net, www.asb365.com, www.a28bet.com and www.afb1188.com.

Typically, according to previous investigations, the sites are put up by Chinese operators and run by local networks. Officials are now working to identify the sources and, once they do, they’ll release all the details. Those local assets are vital to the operation of the sites, and Chhay Kim Khoeun, a spokesperson for the National Police, explains, “If there was no network in the country, it would not be possible to conduct the business.”

The operators know too well how Cambodia law works and know that the country can’t prevent them entirely from being accessed by Cambodians. A spokesperson for the Telecommunication Regulator of Cambodia explains that the CSD has to send a request to the MPT to block the sites, because the regulator doesn’t have the authority to intervene against foreign websites. Despite the efforts, the use of virtual private networks (VPN) and other tools could allow locals to still access the sites, which the government says are used by mafias and others to launder money and finance terrorism.

A cursory review of the websites that have been targeted by the law enforcement actions shows that they’re not very reputable, and gamblers anywhere should stay away. There is no way to access information about the operator or offerings without first creating an account and, on at least one site, the account creation includes an automatic agreement to adhere to the site’s rules, which can’t be read without first signing up. Those types of questionable actions show that there is zero user protection, and entering any personal data on the sites could lead to identity theft or loss of funds. Should that happen, there would be no recourse for consumers in countries where the sites are illegal.