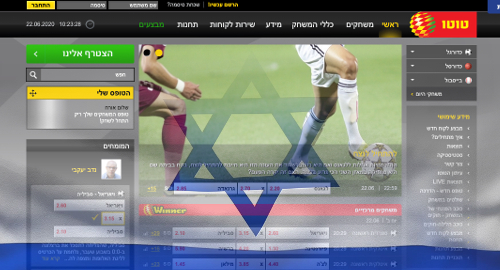 Israel’s sports betting monopoly could add in-play betting to its product mix if a campaign by local sports bodies finds favor with the government.

On Monday, Israeli media outlet Globes reported that representatives of the nation’s sports bodies had met with the Knesset Education, Culture and Sport Committee to plead for ways to offset their financial struggles following the COVID-19 lockdown of sports events.

Among the suggested means of generating extra revenue for sport are enhancing the product offering of the state-run Israel Sports Betting Board (ISBB) by adding in-play wagering to its existing pre-match betting markets.

The sports bodies argue that that limited offering available via the ISBB’s Winner and Toto brands are steering Israeli punters to the infinitely wider variety of wagering options via the thousands of internationally licensed betting sites serving the local market. This is depriving the government of tax revenue and depriving sports organizations of funds they claim they need to see them through the current crisis.

A few years ago, such a suggestion would have been dead on arrival, thanks to the stridently anti-gambling views of former Minister of Finance Moshe Kahlon. But Kahlon opted to retire from politics this year and his ministerial role has been assumed by Israel Katz.

However, elements within the Ministry have reportedly expressed skepticism that in-play betting would result in any significant financial windfall for the state. The sports group’s presentation forecast initial in-play betting turnover at around ILS500m (US$145.3m) per year and revenue topping out at ILS50m, which might not be worth the grief the government will undoubtedly face from anti-gambling campaigners. The presentation did suggest that turnover figure could double within 10 years.

The Ministry of Culture and Sport issued a statement saying in-play wagering was “a complicated subject with many aspects” and promised only to discuss and examine the matter “in depth.” The Finance team was even less definitive, saying “no professional position has yet been formulated on changes in this area.”