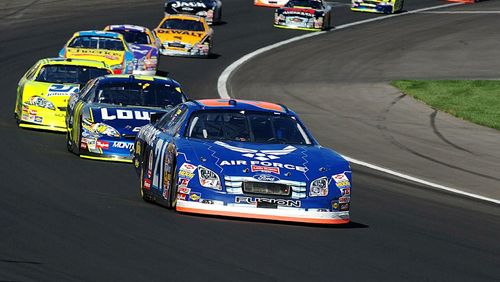 There are two superspeedways on the NASCAR Cup Series circuit: Daytona and Talladega. Racing is simply different at those two huge tracks and that’s why NASCAR used to put restrictor plates on the cars to keep speeds from getting too high. The 1997 event at Talladega still stands as the fastest NASCAR race to date ever run with an average speed of 188.354 mph.

Restrictor plates in theory prevented such crazy speeds and ensured pack racing, but they usually also guaranteed at least one monster multi-car wreck per race. The series did away with restrictor plates last year, replaced by tapered spacers.

Denny Hamlin won the season-opening Daytona 500 this year, and he’s a co-favorite at +1000 to win the Cup Series’ first trip of the season to Talladega on Sunday for the Geico 500 – that’s miles, not laps (there will be 188 laps). This was to be held in late April but rescheduled due to the coronavirus. Talladega also is set to host the YellaWood 500 playoff race on October 4.

There actually will be a limited number of fans allowed in the stands Sunday just as there was last week in the Dixie Vodka 400 at Homestead-Miami Speedway. No more than 5,000 fans will be allowed to sit in the front-stretch grandstands.

Hamlin has raced 28 times at Talladega and has an average finish of 17.7. His lone victory at the Alabama track was in this race in 2014 when it was called the Aaron’s 499. The race ended under yellow when Justin Allgaier crashed into Alex Bowman coming to the white flag. Hamlin has seven Top-5 finishes at Talladega overall.

Brad Keselowski (+1100) leads all active drivers with five career wins at Talladega and has done so three times in this race: 2009, 2012 and 2016. In that latter win, a huge wreck was unfolding behind Keselowski as he crossed the finish line. His average finish in 22 races at Talladega is 16.0.

The best average finish among active drivers is 10.5 by Ryan Preece (+8000), but he only has two races from last year under his belt at Talladega, finishing third and 18th. Chase Elliott (+1000) won last year in the first race run at Talladega without restrictor plates since 1987. There was a horrifying last-lap crash by Kyle Larson. Elliott’s average finish in eight Talladega races is 13.2. Also at +1000 is Joey Logano, who has three career wins at Talladega.