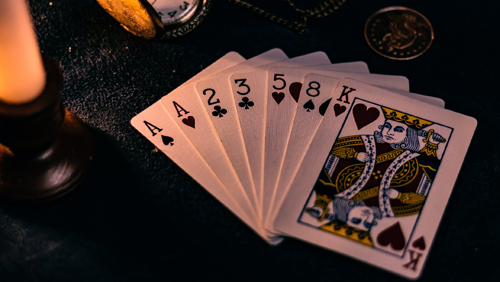 This week, in our regular feature about poker appearances on television and at the cinema throughout the ages, we talk about a classic in TV poker terms.

Taking place at the Golden Nugget in Las Vegas in 2005 and at Caesars Palace between 2006 and its conclusion in 2013, the NBC National Heads-Up Championship is one of those TV shows which should never have gone away and which, if it came back today, would likely be twice as popular as it was in its heyday.

Ali Nejad and Matt Vasgersian were the commentary team from 2007, with Gabe Kaplan in the Ali Nejad role in 2005 & 2006. The undoubted stars of the show, however, were the players, who went heads-up against each other one-on-one through the Round of 64 to a winner.

The buy-in to the event was a massive $25,000, and was by invitation-only, meaning only the best and most exciting players were invited along to play. Each round – with players already part of the full draw in four sections of clubs, spades, hearts and diamonds, naturally – would see a heads-up game determine which player moved on to the next round. The final was a best-of-three match to see who would become champion.

All it took, then, was to win six heads-up matches in a row against the best poker players in the world. OK, that sounds brutal. In 2005, it was Phil Hellmuth who won the tournament, beating Chris Ferguson at the felt 2-1 in the final. Ferguson would return in the next season and get all the way to the final again, only to be denied by Ted Forrest, who won the $500,000 top prize.

Only the top 16 players were paid, with players finishing from 9th to 16th getting a refund of $25,000. The big money was in the top four places, and in 2007 it was the turn of Paul Wasicka to win the half-million, not coming close to his result in the 2006 WSOP Main Event heads-up against Jamie Gold, but satisfying his desire to close the event out, Wasicka toppling Chad Brown 2-0 in one of only three final heads-up matches to be won 2-0.

In 2008, it was finally Chris Ferguson’s year as the Full Tilt Pro got the better of Andy Bloch by the odd game to take the title, and he was followed into the record books by Huck Seed (2009) and Annie Duke (2010), who beat Vanessa Rousso and Erik Seidel respectively.

If Seidel was annoyed to have got so close, he didn’t show it but in 2011, the poker everyman got all the way to the final and this time would not be denied, beating Chris Moneymaker 2-0 in the last shoot-out. That was that for 24 months as the NBC National Heads-Up Championship took a year off, with a no-show in 2012.

In 2013, it would be Mike Matusow who would win through, taking home an incredible $750,000 top prize to runner-up Phil Hellmuth’s $300,000. The action across the season was incredible, such as the Round of 64 that was packed with talent.

Heads Up between Phil Laak and Phil Ivey is always fun, but when the episode in question also features players such as Justin Bonomo, Barry Greenstein, Mike Matusow, Viktor Blom and Isaac Haxton, there’s a lot of action to go around a very tight room. You can watch this drama-packed 45 minutes right here: