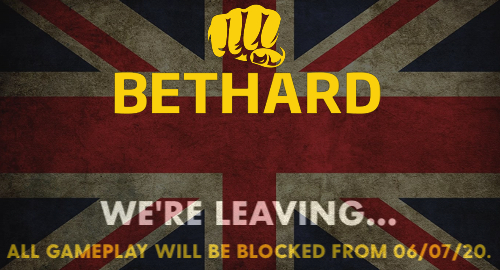 Online gambling operator Bethard is leaving the UK market next month, the latest in a growing rush to the exits amid the UK’s increasingly restrictive regulatory regime.

On Monday, Bethard’s UK customers reported receiving emails from the company alerting them to the fact that the site was withdrawing from the UK market effective July 6. Players will still be able to wager up until July 6, but all open bets will be closed following that date. Customers have been told they’ll have until August 10 to withdraw any remaining balances in their accounts.

The Malta-based Bethard, which only received its UK Gambling Commission license two years ago, didn’t offer any specific justification for its decision to bid the UK buh-bye, saying only that the decision came following “a careful review of our strategic options.”

Bethard’s decision was likely influenced by the prolonged pandemic-related dearth of major sports events on which its customers could wager. However, its withdrawal announcement coincided with the first media reports of the All Party Parliamentary Group’s proposals for major new curbs on gambling operators’ activities, which, although they’re only recommendations at this point, may have signaled that these tough times are only going to get tougher, at least in the UK.

The UK’s increasingly inhospitable regulatory climate is believed to have contributed to the minor stampede of other operators who have opted to withdraw their services from the market over the past year or so.

Bethard also holds gaming licenses issued in Malta, Denmark, Ireland, Spain and Sweden. The latter market just this month imposed an SEK400k (US$42,700) penalty on Bethard for accepting wagers on underage football, although that fine was smaller than the one originally imposed on the company one year ago.

Bethard.com have released a new innovative and unique casino environment
Press Releases
28 May 2019