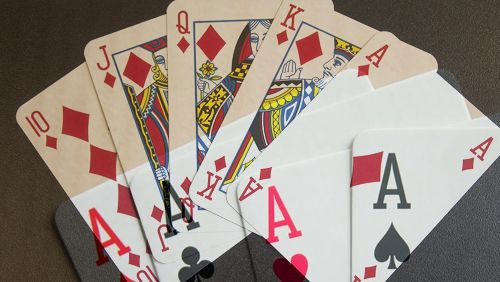 Last week, we brought you the statistically worst World Series of Poker bad beat of all-time. It involved Bryce Yockey, 2-7 Triple Draw and a 0.16% chance from the flop.

Was it the most dramatic, however? What about the most unlikely scenario that could lead to a showdown between the two biggest hands in poker? Well, that hand happened back in the 2008 World Series of Poker Main Event.

The hand in question possibly only ever made it to screen because of the presence of actor Ray Romano, who starred in Everybody Loves Raymond and who played the WSOP Main Event for five consecutive years between 2007 and 2011 as well as in both 2013 and 2015.

Romano is sitting two seats to the left of Justin Phillips in the hand, which had already reached the river on a board showing Ah-9c-Qd-Td-Ad. As the on-camera action begins, the commentary team announce that Motoyuki Mabuchi has already made a bet, and we then see Justin Phillips raise that bet.

“Phillips now fires back with a raise,” as Lon McEachern says in the booth. “Has Justin Phillips bet the shirt off his back?”

At this point, we should talk about what Phillips is both wearing and doing. Wearing noise-cancelling headphones atop a fantastic head of deep red hair, Phillips is wearing nothing up top other than a white vest. He’s got a half-empty can of Mountain Dew on the poker table next to his chips.

Mabuchi, sensing that this is the moment of his lifetime, pushes his chips into the middle of the table saying, simply, “Gamble!”

The Japanese player Mabuchi is about to become infamous, but not how he imagines. This is because although he has pocket aces, and therefore has rivered four aces, he has been beaten by the only hand in the deck that can stop him – king-jack of diamonds for a Royal Flush.

Sadly for all televisual fans, the camera is not on Mabuchi’s face. If it was, it’s likely that we’d see a facial expression that has never been seen in human history either before or since.

Phillips’ call is both swift and forgiving in its utterance.  Up he stands, removing the headphones as he casually glances across the felt at what his losing opponent had.

Having caught sight of the pocket aces, Phillips is staggered at what he has managed to do.

“Wowwwwwwwwwwww,” is the sound that comes out of Phillips’ mouth and it keeps coming. Ice ages arrive and thaw. Players are busted on other tables. Mabuchi shakes his head, disbelieving of the reality in which he finds himself standing, on auto-pilot in preparation to leave the Main Event of the biggest poker tournament on Earth.

“You gotta be kidding me!” McEachern elucidates in the studio. “Quad aces – your last hand of the Main Event. What a way to hit the rail.

Mabuchi emits a groan that starts in his soul and ends echoing around the Rio’s main room. Phillips, clearly ecstatic beyond reasonable levels for a person to experience, stacks his chips and listens to the celebrity at the table try to make sense of the implausible.

Romano, perhaps demonstrating why even the best actors of all time relied upon scriptwriters for their golden celluloid moments, says to Phillips, “There’s nothing that’s more ultimate than that.”

Phillips, seeing Mabuchi prepare to leave the arena, stands and shakes his hand.

“What a horrible river card for your hand.” He says, pouring a full kilogram of salt into the most open of horrific wounds.

“You flop a set of aces, river quads and lose?!” says McEachern as Mabuchi walks disconsolately away from the table. “That’s a bad beat.”

According to the commentators in the aftermath, it was determined that the odds of these two hands combining on the river were something like one in 2.7 billion.

Motoyuki Mabuchi, who literally staggered from the table and out of the Rio had his ‘Gamble!’ moment preserved in World Series of Poker history, where it will likely be replayed forever. Just… not quite in the way he imagined until his opponent revealed that mystical Royal Flush.

Phillips, just 27 at the time, reveled in his moment of victory, literally flexing his muscles, hugging the dealer and quoting Romano’s sitcom lines back at the celebrity.

You can watch the hand in all its glory right here: