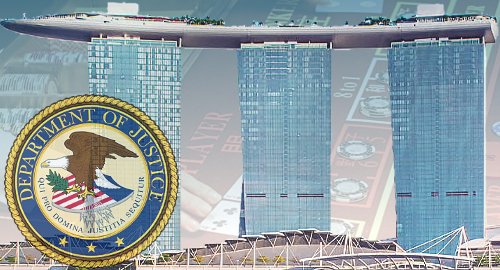 as Vegas Sands’ Singapore casino Marina Bay Sands (MBS) is reportedly being investigated by the US Department of Justice for potential violations of anti-money laundering (AML) regulations.

On Thursday, Bloomberg reported that the DOJ had issued a grand jury subpoena in January to a former MBS compliance chief seeking information on “money laundering facilitation” and possible abuse of internal financial controls in the casino’s dealings with its VIP gamblers and junket operators.

MBS responded to Bloomberg’s inquiries saying it takes any suggestions of impropriety seriously and investigates all assertions of wrongdoing brought to its attention. The DOJ has neither confirmed nor denied the report and Bloomberg sources claimed that neither MBS nor its parent company had received any requests from the DOJ regarding this latest probe.

It’s unclear if the DOJ subpoena has any connection with a corruption case currently before the courts in Indonesia’s capital Jakarta. Heru Hidayat, president of local shipping giant PT Trada Alam Minera, stands accused of pilfering state assets and laundering the cash through casinos in Macau, New Zealand and Singapore, including MBS and its local rival Resorts World Sentosa.

MBS is currently the subject of a separate probe by Singapore’s Casino Regulatory Authority (CRA) after a VIP gambler sued the company last year, claiming the casino illegally transferred money in his account to other gamblers without his knowledge.

MBS was forced to shut its doors in early April to minimize further COVID-19 transmission. Both Singapore casinos have yet to reopen and the closure continues to do damage to Sands’ bottom line.

TOSS IT ON THE PILE WITH THE REST

Sands’ dealings in Asia have occasionally got the company into hot water with the DOJ. In January 2017, Sands paid nearly $7m to resolve an investigation into violations of the US Foreign Corrupt Practices Act stemming from transactions in China and Macau. The year before, Sands paid $9m to the US Securities and Exchange Commission and $2m to Nevada gaming regulators to resolve related probes.

Those fines paled in comparison to the $47.4m penalty Sands paid in 2013 for not asking the right questions when an alleged methamphetamine kingpin transferred millions of dubious dollars into his casino accounts in Las Vegas.

All of the above probes occurred prior to the 2016 election of US President Donald Trump, a victory for which Sands boss Sheldon Adelson’s campaign contributions deserve at least some of the credit. Frankly, given that current DOJ boss Bill Barr acts more like Trump’s personal lawyer than America’s top cop, we don’t see this current Singapore probe going far.