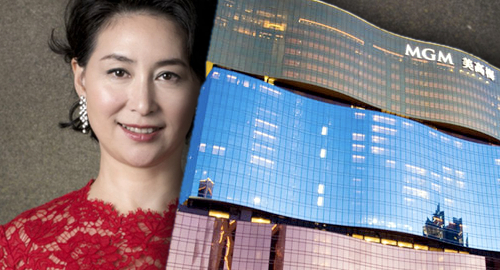 Both men are longstanding MGM China veterans, with Feng’s tenure dating back to 2001 while Wang has been in the fold since 2011. Both men are being asked to fill the void left by Bowie, MGM China’s CEO, who last month announced his intention to surrender the reins as of May 31.

The appointments met with some skepticism from analysts at Sanford C. Bernstein, who noted the “limited direct casino operations and marketing management experience among the top executives.”

The analysts underscored this unease by noting that MGM China’s new Cotai casino had endured a “slow ramp up” since its February 2018 launch and competition will only grow stiffer once rival SJM Holdings finally opens its Grand Lisboa Palace on Cotai next year.

Ho (pictured) addressed MGM China’s challenges in the face of not only local competition but recovery from the overall Macau market’s implosion in the wake of the COVID-19 pandemic. Ho called the pandemic “a sweeping one with rippling effects that we have never seen before,” requiring “essential adjustments to meet new demands.”

The death last week of Macau icon Stanley Ho has given his daughter Pansy an even greater presence in Macau’s casino market. Pansy reached a deal one year ago with the Henry Fok Foundation to exert control over SJM – whose chair is Pansy’s sister Daisy – potentially giving Pansy a say in one-third of Macau’s six casino concessionaires. The king is dead … long live the queen.