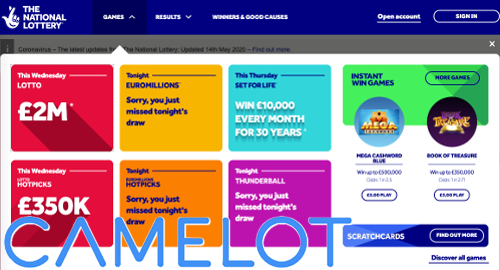 UK National Lottery operator Camelot enjoyed record sales in its most recent fiscal year as digital sales exceeded the £2b mark for the first time.

Figures released Tuesday by Camelot UK Lotteries Ltd show the company generated sales of £7.9b in the 12 months ending March 31, an increase of nearly 10% from 2018-19’s £7.2b. The gains came despite the “disruption” at the tail end of the most recent fiscal year due to COVID-19, particularly at the retail level.

The minimal gains are something of a disappointment given Camelot’s efforts to shore up its land-based business, including adding self-checkout sales at hundreds of Aldi and Asda stores and a trial run at the 800-store Iceland supermarket chain.

By contrast, digital sales hit a new record of £2.46b, up more than one-third from the previous year, while mobile sales were up nearly three-fifths to a record £1.6b. That mobile number was only around £700m two years ago, growth that Camelot credited to the new “look and feel” of its iPhone and Android apps.

Draw-based games remain Camelot’s bread-and-butter with sales of £4.54b, up 11% year-on-year, thanks in part to tweaks to its Lotto product, which Camelot claims makes it “one of the few operators globally to be growing its flagship lotto game.” National Lottery Scratchcard and online Instant Win Games reported sales up 7.7% to £3.37b.

Camelot CEO Nigel Railton said sales in the pandemic period were “currently proving resilient” thanks in part to some “urgent interventions.” Railton warned that the year ahead “will inevitably be challenging” but expressed confidence that Camelot was up to the challenge.

In May, Camelot suspended rewards program payments to its partner stores because its field teams were grounded due to COVID-19. Retailers grumbled, some noting that they only learned of the change via social media,

Camelot is currently on tenterhooks waiting to see if it will be allowed to continue operating the National Lottery, or whether a bid by one of Camelot’s many challengers will prove more enticing. The tender process was supposed to get underway in March but was delayed with no new launch target specified beyond the first half of 2020.