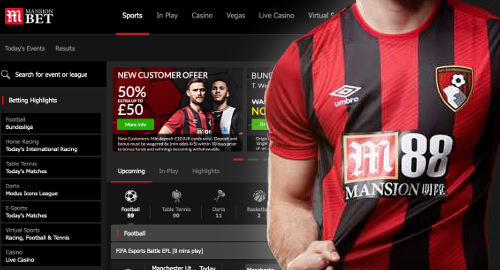 On Friday, EPL club AFC Bournemouth announced that it wouldn’t be renewing its shirt sponsorship deal with M88 aka Mansion88 when it expired Sunday. The club thanked M88 for its support over the past three years but said it would finish the remainder of the EPL’s current season – which resumes play on June 17 – using a different kit.  The sleeve sponsorship with parent company Mansion is reportedly unaffected.

On Saturday, The Athletic reported that Bournemouth’s decision came after being informed that the UK Gambling Commission (UKGC) was “currently looking at various aspects of M88 and Mansion Europe model and operations.”

It’s unclear specifically what aspects of that model are under the UKGC microscope but in April, UK media reported that the UKGC was looking at the VIP scheme of Mansion’s MansionBet brand. The report quoted a Mansion rep telling a customer that the site didn’t like requiring customers to reveal the source of their gambling funds “but we have to do it because the UK gambling regulators make us do it.”

The Mansion Group is no stranger to being on the receiving end of gambling regulators’ disciplinary tools, having been fined €150k by the Netherlands Gambling Authority several years ago for accepting Dutch customers without Dutch permission.

M88 recently announced that it was withdrawing its services from Cambodia and Malaysia. The company didn’t specify the reasons behind the exits, although those two markets are believed to be small potatoes compared to the brand’s business in China, Thailand and Vietnam.

The Daily Mail reported that if Bournemouth couldn’t come to terms with a new commercial sponsor, the club could end up featuring a ‘thank you’ message to COVID-19 frontline medical workers on its kit for the nine games remaining in the current EPL season.