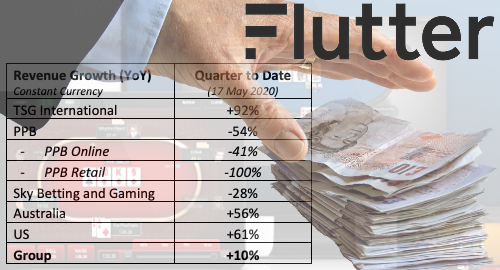 UK-listed gambling giant Flutter Entertainment says business is booming despite the lack of major betting sports, but that didn’t stop it from raising over £812m through a new share issue.

On Thursday, Flutter issued a trading statement covering April 1 through May 17. The enlarged company, which now includes the operations of The Stars Group (TSG), says revenue in Q2 to date is up 10% from the same period last year.

Flutter’s UK- and European-facing operations were far less stellar, with Paddy Power Betfair brands down 54% (online down 41%, retail a complete write-off due to COVID-19 closures) and the online-only Sky Betting & Gaming falling 28%.

Flutter noted that having PokerStars under its umbrella has helped it offset the loss of major sports events due to the coronavirus, while its TVG race betting businesses in the US and the uninterrupted Australian racing sector have also done their bit to keep the lights on.

Online poker and gaming revenue got a boost from the dearth of retail options but Flutter noted that this segment’s growth has begun to “moderate” as retail begins to reopen, a trend that Flutter expects will accelerate.

On Thursday, Flutter revealed that Fox was increasing its Flutter stake by an unspecified amount, part of a move to place just over 8m new Flutter shares with institutional investors. Flutter didn’t specify how much money it hoped to raise, but the company said Friday that the sale had added £812.6m to its stack of chips.

As for what Flutter intends to do with that windfall beyond strengthening its balance sheet ahead of an uncertain future, the company suggested that the post-pandemic US market was in for some regulatory shakeups and Flutter would look to capitalize in every tax-hungry state that liberalizes its gaming market.