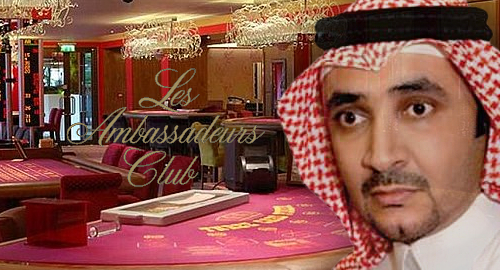 London’s Les Ambassadeurs Club casino is squaring off in court against yet another rich Saudi who doesn’t want to pay their gambling marker.

Last Friday, a High Court ruling lifted a freezing order placed on the UK assets of Sheikh Salah Hamdan Al Balawi, who runs technology and communication consortium SAB Ventures. The ruling had been sought by the operators of Les Ambassadeurs after Al Balawi reportedly reneged on a £2m gambling debt.

Al Balawi (pictured) has been a patron of the members-only Mayfair casino for over a quarter-century, making over 150 visits to the property during that time. But the relationship soured after banks refused to honor 17 checks the sheikh left with the casino as collateral against a £2m gambling marker.

The casino claimed that Al Balawi had ghosted them after they attempted to confront him regarding the bounced checks. A subsequent probe revealed that the sheikh had “run up significant gambling debts with other London casinos and has simply walked away from them.” Al Balawi reportedly viewed the Les Ambassadeur marker as an “illegal gambling debt.”

Al Balawi’s lawyers claimed the sheikh had warned Les Ambassadeur in advance that the checks would bounce and that he simply missed the casino’s subsequent attempts to contact him. Al Balawi further acknowledged that he’d been banned from the casino for not paying previous markers but was reinstated after making good on his debts.

Les Ambassadeurs sought to freeze Al Balawi’s assets due to concerns that the sheikh would shift them out of the UK and repatriate himself to Saudi Arabia, where gambling debts aren’t legally enforceable.

High Court Justice Freedman justified lifting the freezing order by noting that Al Balawi had substantial ties to London, including a £45m London mansion. That, as well as Al Balawi’s immense net worth, led Freedman to conclude that a £2m marker was insufficient reason for the sheikh to pursue the complicated process of shifting his UK assets out of the country.