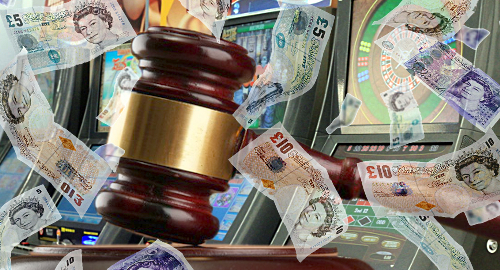 UK retail bookmakers are popping the champagne corks on news that the country’s taxman won’t appeal a legal ruling that the industry is owed a billion-pound refund on gaming machine taxes.

On Wednesday, UK bookmaker William Hill announced that Her Majesty’s Revenue & Customs (HMRC) had confirmed it doesn’t intend to appeal an Upper Tier Tribunal ruling from mid-April that the industry was unfairly charged value-added tax (VAT) on revenue from fixed-odds betting terminals (FOBT) in their betting shops and bingo halls.

The case dates back to 2013, when HMRC removed the 20% VAT on FOBT revenue, which was on top of the 15% duty bookmakers also paid on the machines. That double-dipping was replaced in 2013 by the 20% machine games duty, which was subsequently raised to 25%.

Gaming operators Betfred and Rank Group launched a legal challenge of the applicability of the VAT, arguing that HMRC wasn’t applying VAT to similar roulette-type products in either land-based or online casinos.

In mid-2018 a First-Tier Tribunal ruled in favor of the gaming operators, saying the double-dipping “breached the principle of fiscal neutrality.” HMRC appealed this ruling, which was upheld by the Upper Tier Tribunal last month.

The VAT had been applied to FOBTs from 2005 to 2013, and the total sum collected from UK gaming operators has been estimated to be as high as £1b, of which around £100m is reportedly owed to Betfred alone.

William Hill’s Wednesday announcement noted that the company has “submitted claims which are substantially similar to those provided in the VAT challenge.” While accountants on both sides have yet to agree on a figure, Hills says it could be in for “a potential net cash recovery of between £125m and £150m.”

GVC Holdings, a major high-street operator through its Ladbrokes and Coral brands, previously stated that it could be in line for a refund as high as £200m. On Thursday, it repeated this amount as its likely payday. Other companies, including Flutter Entertainment’s Paddy Power brand, could press similar claims.

The UK government dealt the retail betting sector a crippling blow in April 2019 when it reduced the FOBT maximum stake from £100 to just £2, prompting operators to close hundreds of shops. The retail sector has since been shut entirely due to the COVID-19 pandemic, prompting fears that hundreds more shops will remain permanently shuttered once the all-clear is sounded.

As one might expect, the media outlets, parliamentarians and anti-gambling campaigners that led the assault on FOBTs are screaming bloody murder over the idea that the government will now be writing major checks to betting operators. Expect new campaigns to force the industry to repay any financial assistance offered during the pandemic.