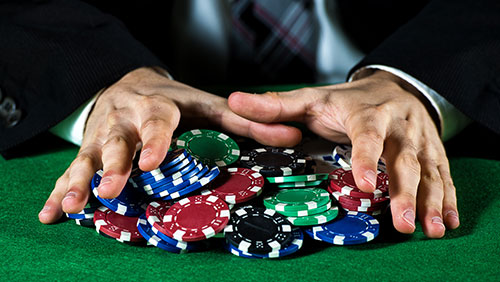 With the PokerStars SCOOP festival building towards its now-extended finale,  one of the biggest events  left in the schedule is Event #73. Costing $2,100 to enter, it has seen plenty of big names pony up the funds to stack up some starting chips and saw a very busy Day 1 end with 37 players heading through to Day 2 to gloat at those left in their wake.

In the event otherwise known as the Sunday Warm-Up, 501 players took part across nine hours of action on PokerStars, which saw commentary on the action provided by Joe ‘Stapes’ Stapleton and Matt ‘The Waster’ Broughton, the two men back in tandem for the first time in a while and bringing back happy memories to EPT fans as they did so.

Play grew from just four tables of players at the start of the tournament, with a $750,000 guarantee eventually being comfortably surpassed to see a $1,002,000 prizepool confirmed, and a massive top prize of $177,965 now up for grabs for the eventual SCOOP event winner.

Play kicks off at 1.05pm ET / 6.05pm BST today, and will restart with ‘zivziv’ leading the pack with a chip mountain of 3,684,880 chips. They are just under 500,000 chips ahead of nearest challenger ‘boerni21’, but behind them, it reads like a who’s who of poker players you’d like to avoid having a lot of chips in a tournament you’re playing in.

Stefan ‘baeks22’ Schillhabel sits in 3rd position currently, with 2,933,699 chips and a massive chance of yet another career-defining title, Mustapha ‘lasagnaaammm’ Kanit has enjoyed a very strong series to date and is also in the top five chipcounts, with Pavel ‘silentm0de’ Plesuv making up those top five in style.

One of the biggest pots that went Kanit’s way saw him win a huge flip against Brazilian pro Joao Vieira, whose pocket queens were outrun by Kanit’s ace-king as the Italian found two pair by the river.

With $5,190 already guaranteed, all the remaining players will have their eyes on those six-figure prizes at the top of the payouts list and will be battling hard for the win when play resumes. Will it be Kanit, Schillhabel, Holz or Plesuv who go on to win, or will a new name become the latest PokerStars SCOOP champion? We’ll let you know right here on Calvin Ayre.

You can watch a series of highlights from the Spring Champion of Online Poker on the PokerStars Twitch channel right here.