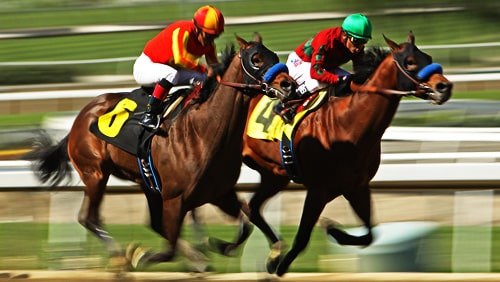 The Kentucky Derby schedule has already been thrown off by the coronavirus pandemic, with plans for the races to be moved from the beginning of this month, when they should have taken place, to possibly September. While a virtual Kentucky Derby was held as a peace offering in lieu of the live event (Secretariat won, just as oddsmakers predicted), it wasn’t the same, and fans are anxious for the real deal to take place. Churchill Downs is ready to put some races together this weekend, which should keep fans excited, but the impact COVID-19 has had on the industry is forcing the Derby to make some changes to prepare jockeys and horses for a new season. The qualifying system used for the Road to the Kentucky Derby will now temporarily include a few more races in order to award a few more chances for jockeys to pick up some points ahead of the Triple Crown.

The updated list includes, among others, the Grade II Blue Grass Stakes (the date still hasn’t been decided) at Keeneland, the TVG.com $1 million Haskell (G1) at Monmouth Park in July, Del Mar’s Shared Belief (no date as of yet) and the Matt Winn Stakes (G3) on May 23. TVG and NBC Sports plan on airing coverage of the races that will be getting underway this weekend at Churchill Downs.

In an announcement (in pdf) about the changes, Mike Ziegler, executive director of racing for Churchill Downs Inc, stated, “We’re in the midst of an unprecedented year, and this year’s Kentucky Derby and Triple Crown will be one of the most memorable of our lifetimes. There are a lot of moving parts and there are still a lot of unanswered questions, including who will be running and when.”

The Matt Winn Stakes event has been given an extra boost, with more points added to the top four finishers. The winner will take 50 points and, most likely, a guaranteed spot in the Kentucky Derby. Ziegler explained about these changes, “Based on measured interest from horsemen and limited racing opportunities for 3-year-olds across the country, the Matt Winn at the home of the Kentucky Derby appears to be the lone race in May on the national calendar for horsemen to use as a prep to possible important stakes engagements in mid-to-late June. For that reason, we’re pleased to be able to fill the void and raise the significance of the Matt Winn.”

In addition to the U.S.-based Road to the Kentucky Derby, the European and Japanese versions are also going to see some changes, which are expected to be announced in the next couple of weeks. The Road to the Kentucky Oaks is altering its lineup, as well, and, once approved, could include Delaware Oaks, Monmouth Oaks, Santa Anita Oaks and others.