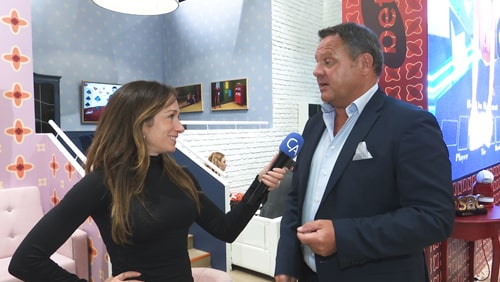 Although so many types of operation have been put on hold thanks to the COVID-19 pandemic, live dealer studios have found ways to stay open and keep the business going. While their long term goals may have been altered somewhat, our Becky Liggero Fontana met up with BetGamesTV’s CCO Richard Hogg at ICE London earlier this year, learning how the business has branched out globally.

BetGames have built up a pretty impressive portfolio of games to offer, with a slick presentation. “At present today, we have ten games, two of which are brand new,” Hogg said. “So we’ve got a game called Speedy 7, which is quick, fun and interactive. You’re basically betting on the outcome of the next color of the card. So they’ll deal seven cards, very straightforward very simple, players love it, it’s been a great reception, we launched it at SiGMA last year we had a live table and event there, fantastic. Another one’s Poker 6, which is a twist on a poker game of which we already have. So players get the opportunity to bet fixed odds outcomes on a range of our games, lottery balls games, card games, dice games, and the odd quirky game like a spinning wheel.”

But more impressive than their games has been the global presence BetGames has established, and the name recognition they’ve earned. “Our main markets right now are South Africa, you can’t be live in South Africa without BetGames,” Hogg said. “It’s a bit strange how it’s happened this way, but we are. In a retail environment, you will go to any shop in South Africa, you will see BetGames, branded as BetGames. Not because we demand it, because the players know it, so they expect to see it. Online also, they’re there. With that we’re also in a lot of CIS, former CIS countries, Balkans, very well-known, again both online and retail.”

When we spoke with Hogg, the business was expanding again, this time into India. “We’ve just recently launched in India with one of the big operators there, and they’ve been blown away by the participation of the games,” he said. “After five days of being live they came and saw us here at ICE, and they said, ‘Wow, these games have just taken off, we haven’t seen anything like this with a new product launch whatsoever.’ So we’re hoping India can be our next South Africa, or our next Balkans. Added to that we’re seeing tremendous opportunity in growth in South Korea, in Vietnam, and Cambodia, as well as LATAM countries and more usual European companies. So the world has basically taking notice of our games now.”

The one challenge that BetGames still hadn’t figured out, and this pandemic might have pushed even further down the line, is China. “I didn’t mention China because that is an anomaly in that they do expect Asian presenters, we don’t have any as such, so we’ve taken a decision maybe not to target that market,” he said. “There is still some interest, but it’s going to be a tough one to crack.”

Once all of this quarantine stuff is over, we already have an idea of what BetGames is hoping to do in the near future. “We are looking at localization, we’ve got a very big client in Poland, who is asking for a local product, so with Polish speakers, for example,” he said. “At the moment all of our speakers presenters are English, but we are looking for localization. I know South Africa will ask for stars to present it, so we’re working out ways to do that, so be more in line the partners. We’ve added system bets, jackpots, leaderboards, some things outside of the game so that people can really engage and use those tools as acquisition. So you know we’ve got some great feedback that the games help convert players from sports to casino, and vice versa, because there’s a unique twist on the game, so there’s some really good opportunities there, and just build up on that product.”