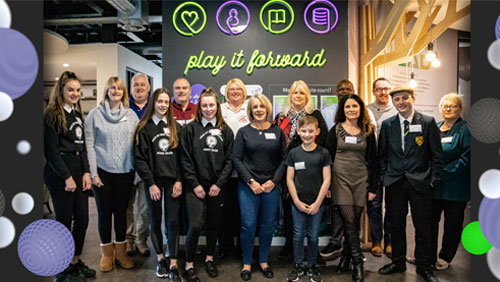 ISLE OF MAN – This month marks the second anniversary of a staff-led charitable initiative set up under Microgaming PlayItForward that has generated more than £120,000 in donations since inception.

Now in its sixth year, and aiming to change the game for people, place and planet, PlayItForward is the corporate social responsibility (CSR) programme of world-leading software supplier, Microgaming.

Driving employee engagement with PlayItForward, the initiative provides a dedicated space at Microgaming’s headquarters in the Isle of Man for employees and guests to put forward suggestions and vote for the causes which they would like to see receive support from PlayItForward.

Since it officially launched in April 2018, the initiative has attracted over 7,800 votes and more than 55 staff suggestions. In 2019 alone, 12 charitable initiatives were voted for by staff to receive support from PlayItForward. In addition, over 30 worthy causes were put forward by staff, resulting in over £50,000 in donations, along with guidance, volunteer opportunities and practical support.

Some of the charities that have directly benefited through the initiative within the last year include Isle of Man-based organisations Huntington’s Disease Association, The Children’s Centre, Greenhills Sanctuary IOM, Victim Support Isle of Man, and Marown Bowling Club.

The staff-led scheme not only supports charities and organisations with their work, but also individuals in need of a helping hand. For example, local resident Jake Hodgson was voted for by staff to receive support to assist with the purchase of equipment, including walking boots and trainers, a road bike and cycling clothing, to support his three-country challenge in aid of the Alzheimer’s Society and Hospice Isle of Man Dementia Care.

John Coleman, CEO of Microgaming, comments: “April 2020 marks two years since Microgaming PlayItForward officially launched a dedicated space for employees to nominate and vote for worthy causes close to their hearts, resulting in more than £120,000 being donated to charity. The staff-driven initiative aims to drive employee engagement, encouraging active participation with our CSR programme, and giving us the framework to get directly involved in communities worldwide as we continue to do good and implement positive change.”

Helen Martin, Chairman at Huntington’s Disease Association IOM, comments: “Microgaming building a website for us will help us reach those families affected by Huntington’s disease who don’t feel they can attend a support group. Huntington’s is a disease that is very hard to talk about if you’re not ready. The information on the site keeps them up to date with what we are doing and how we can help them – it is also great for raising awareness and funds.”

Jane Howland, Fundraising Manager at The Children’s Centre, says: “For most of us, the festive season is a time of joy. But Christmas isn’t always easy for the vulnerable children and their families we support. We reached out to Microgaming asking for help in making Christmas special, to support our initiative and become ‘Secret Santa’ this Christmas. I can absolutely say we were blown away by the generosity of Microgaming, the presents bought were truly phenomenal.”

Phil Kelly, Secretary and Joint Treasurer at Marown Bowling Club, comments: “Last year we started looking at building a new clubhouse at Marown, and part of the process was raising money. We reached out to Microgaming and were delighted to be accepted for the £1,000 donation. This will go a long way towards our clubhouse.”

Caroline Cardona, Founder and Chairperson at Greenhills Sanctuary IOM, says: “The Microgaming PlayItForward donation has helped with ongoing veterinary treatment, food supplies for all our animals and branded clothing for helpers to wear to raise awareness.”

Microgaming PlayItForward was established in 2014 by world-leading software developer, Microgaming, which is headquartered on the Isle of Man. The staff-driven, volunteer-led initiative encompasses all aspects of the award-winning technology company’s longstanding CSR programme, which aims to change the game for people, place and planet.