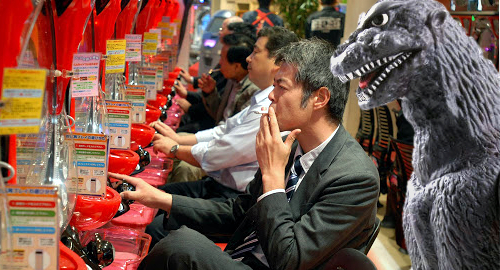 Japanese pachinko parlors are proving harder to kill than Godzilla, despite public shaming by some local governors.

Earlier this month, some Japanese politicians expressed displeasure at the reluctance of some pachinko operators to shut their doors to reduce the spread of COVID-19. But the national emergency declared by Prime Minister Shinzo Abe didn’t arm local governors with the authority to actually order the businesses to close.

Politicians responded with the only tools at their disposal: publicly naming and shaming pachinkos that remained open. In Tokyo, Governor Yuriko Koike said Tuesday that 156 pachinkos had closed following public pressure but hundreds of others are believed to remain open.

Things have gone less smoothly in Osaka prefecture, where around 30 pachinkos were still open going into last weekend. Agence France Press reported that Gov. Hirofumi Yoshimura had publicly shamed nine operators, although this has resulted in only some of them closing their doors.

One Osaka pachinko operator that has kept its operations going is Okada Enterprises, which claims it’s resisting pressure to close in order to safeguard the livelihoods of its 600 staff. Gov. Yoshimura says there are more pressing concerns, as “it is very possible that infections spread at these places.”

Yoshimura claimed that publicizing the names of the offending establishments was intended “to ask Osaka residents not to go there.” But AFP reported that the publicity was also serving as a means for the pachinko faithful to figure out where to go after their local venue shut.

On Monday, the central government suggested enough was enough and that laws may have to be tweaked to put some bite into the governors’ bark.

Japan reported 247 new COVID-19 infections on Tuesday, including 112 in Tokyo, which had reported only double-digit figures on Sunday and Monday. Prime Minister Abe has until May 6 to decide whether to extend the national emergency.

In late-March, Japan decided to postpone the 2020 Summer Olympics until 2021, but Japan Medical Association president Dr. Yoshitake Yokokura said Tuesday that it “would be difficult to hold the Olympics unless effective vaccines are developed.” Opinions vary, but a tried-and-tested vaccine is widely believed to be at least 18 months away.

Should the Olympics be cancelled outright, Japan’s push to launch integrated resort casinos could get a boost. Japan was already expected to take a financial bath from delaying the Games, but cancelling them altogether would leave Japanese politicians downright desperate for any source of revenue to fill that void.