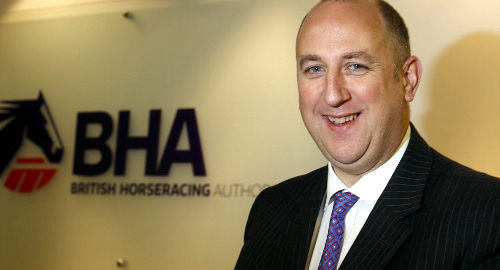 The UK racing industry is fending off calls for the ouster of Nick Rust, CEO of the British Horseracing Authority (BHA), over his alleged failures to safeguard the industry during the COVID-19 shutdown.

Over the weekend, reports emerged that trainers Ralph Beckett and Mark Johnston had sent emails to BHA chair Annamarie Phelps calling for Rust’s immediate removal. The pair accused Rust (pictured) of failing to prioritize live racing’s resumption following its mid-March suspension by the BHA in response to the pandemic.

The BHA originally planned to lift the suspension on May 1 but extended that timeline after the UK government extended its own lockdown of non-essential businesses. The BHA said it hoped to resume racing ‘behind closed doors’ sometime in May but believed racing with crowds in the stands wouldn’t resume “until June at the earliest.”

The two trainers argued that Rust, who in January announced his intention to leave the BHA by the end of the year, is a lame duck leader who is looking to his own future, not racing’s. Beckett urged the BHA not to wait for the government’s approval to resume racing, noting that it was “a BHA decision to stop and it needs to be a BHA decision to restart.”

In response, the BHA board issued a statement on Sunday saying it “understands the pressures on all in racing at present” but it “puts the health of the public and our participants first.” The BHA asked its members not to “single out individuals unfairly for carrying out their role” and said Rust and his team “have the board’s full and unequivocal support.”

Other nations have sketched out more concrete plans to resume their domestic operations, with Germany targeting a May 4 start of racing behind closed doors and France set to follow suit on May 11. Both nations are planning to strictly limit the number of individuals allowed in and around the track, while also requiring social distancing measures and the use of personal protective equipment.