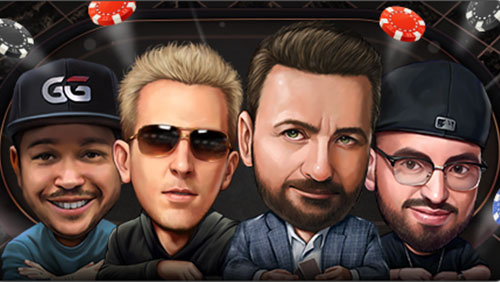 The lastest professional to join the ranks of GGPoker has been announced as French poker legend and former Esports pro gamer Bertrand ‘ElkY’ Grospellier has hooked up with Felipe Ramos, Bryn Kenney and former PokerStars Pro team-mate Daniel Negreanu by donning the GG patch.

It being both a digital internet age and a time of global pandemic lockdown, ElkY made the announcement via the GGPoker Instagram page, where he said he was excited to join the GG ranks.

Having shot to fame as a Starcraft player before taking to poker, ElkY is one of the most popular names in the game, and as recently as last week was happily welcoming Kevin Hart to the partypoker team as a badged-up representative of the ‘Orange Diamond’.

Instead of sticking around to see if Kevin Hart plays any poker, however, ElkY has jumped ship to join GGPoker. Since the brand’s inception, they’ve built steadily, recruiting a major play in South America (Ramos), North America (Negreanu) and now Europe’s most well-known name in ElkY. With over $14.5 million in the bank from poker tournaments alone, the Frenchman is synonymous with winning and boasts the fact that he’s a Triple Crown winner (EPT, WPT & WSOP) to boot.

As much as his live achievement are laudable, however, he’s also the player with the biggest experience of the Esports industry, and this is perhaps the biggest factor in ElkY signing with GGPoker. As a former Esports winner par excellence, ElkY’s experience and global fanship in this area with grow GGPoker’s Twitch reach in a time where online poker is far more likely to grow than live tournaments.

Partypoker have built their reputation in the past two years at having the biggest live circuit tour in the world, with the partypoker MILLIONS live tour living up to its name and creating dozens of seven-figure winners. Their online reach has not grown at the same rate, however and while they have enjoyed some fun online moments and recruited the excellent Jaime Staples, they lag some way behind in the Sunday Majors and have experienced issues delivering some of their major events. A nod to that fact may have been hidden in ElkY’s announcement as he said that GGPoker’s software was the best “by far” and “superior to any other software out there”, something partypoker have not been able to claim in the past 24 months of growth on a global scale.

With the GGPoker Sunday Major ramping up its guarantees in the past month alone, this is a clear move to grow the online arm of the poker brand. Content-wise, ElkY is to Esports fans what Daniel Negreanu and Felipe Ramos are to live players in their respective continents – a hero.

“My favourite feature by far is that you can stake players directly on the GGPoker client.” Said ElkY is another pivotal piece of promotion within his welcome video. “You can sell pieces of yourself or buy pieces of your favourite players. That’s a really cool feature that is automatically integrated and I think it’s the best feature.”

Whilst there was also a promise to “make poker fun again” (crib notes: it’s already huge fun), ElkY was expectedly super-positive on GGPoker’s growth, but that is shared by the Head of GGPoker, Jean-Christophe Antoine.

“With a poker and esports legend like ElkY representing our brand, the GGPoker community will be in for a real treat – all I can recommend is to watch this space!”

If you sign up to GGPoker in in the next three days, you can use the bonus code ‘ELKY’ and earn a free ticket to an exclusive GGMasters Satellite tournament that will take place on Wednesday, April 22nd. It’s something that is bound to be taken up by hundreds of ElkY fans in the next few days as the fourth member of Team GGPoker has arrived.