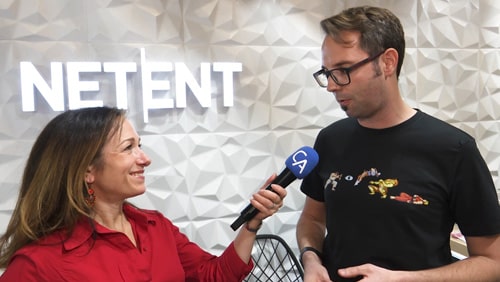 At this year’s ICE London, NetEnt made quite a splash by showing up with several new brands in their portfolio of games. Appealing to the casual TV viewer and the old school gamer alike, they had a little bit of everything, and our Becky Liggero Fontana caught up with Director of Games, Bryan Upton, to talk about what these new games will bring to the public.

The first new brand they spoke about is a classic of the industry that NetEnt is bringing modern features to: Starburst. “Okay, so we know that jackpots are kind of driving a lot of player engagement, so its happening and we’ve been working long and hard on something that’s like the next, next level,” Upton said. “So we have community element, we have a kind of collection element, we have kind of an offline payment part of it, we has everything. So it’s like, totally configurable, customizable, we’ve just gone to town, and then we put the Starburst brand, which is like the biggest one.”

But bringing in new brands is often about bringing in a recognizable, mainstream brand to get new players hooked. For that, NetEnt was proud to show off their deal for the Hell’s Kitchen brand. “So I think, like, I’m a big believer in just diversity,” he said. “”So just trying to do different things all the time, right? Then the industry moves so fast, and we’ve never tackled this kind of subject matter I guess. And when we were talking about the brands, you know when something’s good because your creative team light up, and they had so many ideas about how to tackle this brand in so many ways. I mean it was hard choice, we had so many concepts to pick from, but just having the red and blue kitchen against each other and how do we make that work and it’s, Gordon just coming in and screwing things up or just, you know, adding some extra spice to it. So it’s a huge brand, or he’s a huge brand, Hell’s Kitchen is a huge brand. Its global, its lifestyle, lots of people know it, it’s perfect. So I think it’s going to be a big one.”

Finally, any serious gamer knows the Street Fighter brand, and it’s one Upton has been working to acquire for a very long time. “I mean there’s a history with me and this brand, I’ve been trying to get it for a while, especially in my previous employer and it’s very difficult, but like I said in the announcement, I’d met the right person at the right time inside of Capcom, and he was he was really fantastic, and we managed to get did a really good deal together, because this just everything about it is special,” he said. “Just even pulling out those graphics we got given and start working, and getting those fighters to do their idol moves, and staying to the pixel, and it’s just something magical. It was a great kind of process to go through and I’m overjoyed to be able to bring it to NetEnt and bring it to the world, so it’s going to be something else.”

NetEnt on for another branded smash hit with Street Fighter II: The World Warrior SlotTM
Press Releases
22 May 2020