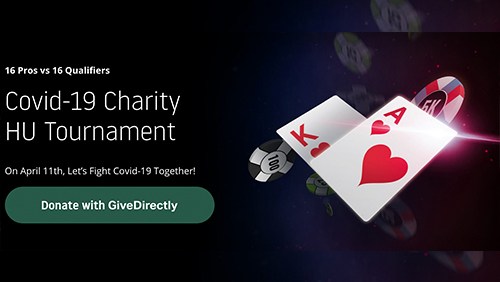 If you’ve ever wanted to play in a knockout-format Heads-Up Tournament against some of the best poker players in the world, then this weekend on Run It Once might well be the best chance you get.

If you are already familiar with Run It Once, it’s highly likely that is due to the recent Galfond Challenge, which just a couple of days ago saw Phil Galfond complete a stunning million-dollar comeback in order to move ahead in the series against VeniVidi.

Fortunately for those hoping to take on Galfond at the virtual felt at “the two-card game”, the man himself will await one of the qualifiers at the felt:

This Saturday, I’ll be taking a break from the #GalfondChallenge to play a little 2-card for a good cause.

Thanks @DanSmithHolla for helping the @RunItOncePoker team put this together, and thanks to all the pros participating. Let’s have some fun!https://t.co/uedBE1s8SV

Galfond has had plenty o help setting up the charity event and turned to one of the most experienced poker players in this regard. Dan Smith has donated millions to charity over the years via his infamous ‘Double Up Drive’, and announced a new charity drive of his own just two days ago, pledging an incredible $250,000 to aid the efforts in fighting COVID-19.

The Run It Once tournament will raise funds for the GiveDirectly COVID-19 Emergency Relief Fund, which you can help by making a donation to the most vulnerable right now. With 16 big names taking part, there are some legends at the felt, with the 32-player event matching up one professional to a qualifier or donor.

The action takes place on Saturday April 11th and kicks off at 15:00 UTC, with the whole thing being streamed on Run It Once’s Twitch page for the fans. With the Emergency Relief Fund helping to support low-income Las Vegas families who have been hit the hardest by the Coronavirus outbreak, Run It Once themselves will be donating €10 for every player who plays a hand on RIO on Saturday, so even if you’re experiencing tough times yourself, just by playing one hand of poker on the site this Saturday will help support those who are in the most desperate need of aid.

The players involved are some of the best and most entertaining in the game, with brothers Sam and Luc Greenwood, streamer extraordinaire Kevin Martin, Daniel Dvoress, Marle Cordeiro, Twitter Personality of the Year Jamie Kerstetter, legendary player and commentator David Tuchman and both Phil Galfond and Dan Smith. With commentary from Joe ‘Stapes’ Stapleton, Henry Kilbane and Tuchman – providing he isn’t heads-up for the glory by that point – it’s going to be a lot of fun to watch. 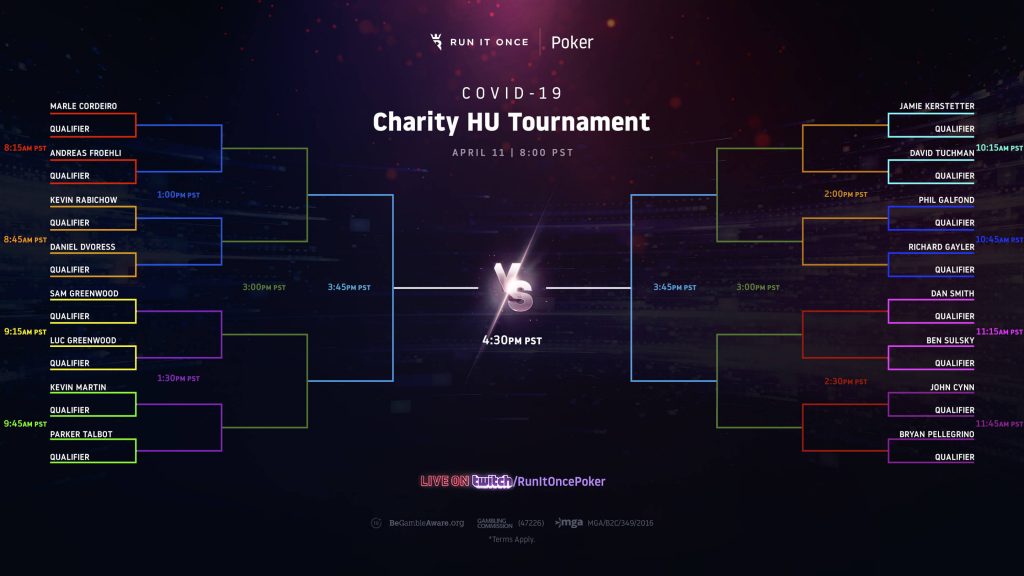 Why watch, however, when you can play? Taking part against the pros in each opening round match will be 16 players who have made donations to be there – and you could be one of them.

With eight places going to the players who make the biggest donations to the charity cause, another eight spots will be players chosen at random from everyone else who makes a donation in any way. You’ve got until 23:59 on Thursday evening UTC to make your donation and give yourself a shot at the Heads-Up title, with the winner of the tournament being awarded a trophy, access to the A-Game Poker Masterclass, three months of Run It Once Training’s Elite plan, and three months of Run It Once Training’s Vision GTO Trainer.

If you’re reading this and thinking that because you live in the United States, Italy or other countries to which restrictions usually apply, you can turn that frown upside down like a one-outer just hit the river on your all-in. With no official buy-in, anyone can play. You can donate as little as a single dollar to the cause and that’ll give you a chance at taking part.

The Covid-19 Charity HU Tournament will get under way at 15:00 UTC this Saturday, 11th April, and there are no re-entries, meaning that if you bust your poker hero, they can’t rebuy and will forever have a losing record against you! Just imagine being able to brag to your poker friends on Sunday night as they ask how you’re spending your isolation, “I’m enjoying it – I just knocked Dan Smith out of a poker tourney. Sure, he has $36.7 million in live winnings, but I’m one for one against him!”

With each heads-up match having a strict 30-minute time limit, it shouldn’t take long to find a champion, and the overall winner is a charitable cause which is so important. If you’re ahead after 30 minutes, you’ll be declared the winner and move onto your next opponent. Good luck!