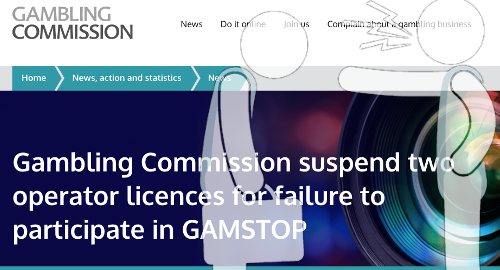 Two UK online gambling operators have had their licenses suspended for failing to fully integrate the GAMSTOP self-exclusion service into their websites.

On Friday, the UK Gambling Commission (UKGC) announced the immediate suspension of the licenses held by daily fantasy sports operator Sportito and Dynamic (which trades under the Prophet secondary sports betting brand). Both operators were found to be violating the UKGC’s January order that all online operators integrate GAMSTOP into their offering by March 31.

The UKGC added that Sportito’s license suspension had already been lifted after the operator complied with the integration order. However, the UKGC has commenced reviews of both companies’ suitability to carry on as a UK-approved online operator and Sportito’s belated GAMSTOP integration won’t halt that review.

UKGC CEO Neil McArthur said the regulator was compelled to act “because the operators had not complied by the deadline, which placed vulnerable consumers at risk.” McArthur added that UKGC licensees should recognize that the UKGC stands “ready and willing to use our powers to protect consumers.”

The UKGC has issued multiple warnings to its online licensees not to abuse the fact that so many UK workers are toiling from home during the COVID-19 pandemic, and the temptation to ditch work for a spell and spin a few digital slots reels might prove overwhelming.

GAMSTOP CEO Fiona Palmer issued a statement on Wednesday urging vulnerable gamblers to make use of its free self-exclusion tools, with which customers can choose to restrict access to all UK-licensed sites for a period ranging from six months to five years.

GAMSTOP, which was introduced two years ago, has been used by over 130k gamblers, nearly three-quarters of which opted for the five-year ban. Some 42% of GAMSTOP users are aged 25-34, the demographic most likely to display problem gambling behavior, according to UKGC data.

In January, marketing affiliates for some sketchy Curacao-licensed online casinos were found to be abusing Google’s AdWords platform by using searches for GAMSTOP to promote methods by which self-excluded gamblers could “bypass” the blocking mechanism.

The UKGC’s enforcement arm has been busy this year, having previously suspended the licenses of Lotteries.com, Stakers Ltd, MoPlay parent Addison Global Ltd and Matchbook parent Triple Ltd for various shortcomings and/or transgressions.