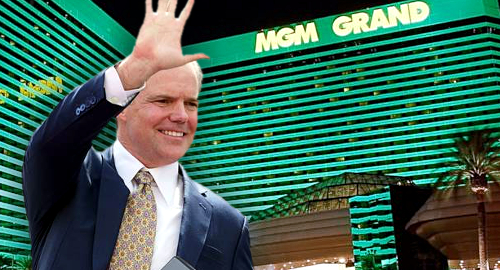 Casino operator MGM Resorts gave its former CEO a $32m golden handshake while its rank-and-file staff are left fretting for their future.

Earlier this week, MGM Resorts’ newly appointed CEO Bill Hornbuckle announced that the company was pledging $1m for an ‘employee emergency grant fund’ to “to offer additional support to employees impacted by the [COVID-19 coronavirus] crisis and who may be experiencing hardships.”

Like all US casino operators, MGM’s domestic activities are currently on hold as the country tries to halt further spread of the coronavirus. MGM announced last week that it would give its staff two weeks’ pay and extend health care benefits for laid off employees until June.

Meanwhile, MGM announced last month that its outgoing CEO Jim Murren – who left abruptly last weekend and was replaced by Hornbuckle – would receive a golden handshake of nearly $32m in a combo of salary, stock, bonuses and monthly ‘consulting fees’ through the end of next year.

Last month, Murren (pictured) announced his intention to leave MGM despite the fact that his contract wasn’t due to expire until the end of 2021. Murren subsequently announced that he would leave earlier than anticipated to head up Nevada’s coronavirus task force.

In a filing over the weekend announcing Hornbuckle’s appointment, MGM claimed Murren’s resignation was not “due to any disagreement” with the company, and thus it had decided to treat his early exit as “a termination without good cause,” thereby allowing Murren to claim his full compensation package “in exchange for a release of claims against the company.”

The fact that MGM chose to redefine Murren’s exit so that he wouldn’t miss out on a penny of his perks may not sit well with MGM’s rank-and-file staff, for whom MGM could only muster two weeks’ pay and $1m to be divided among roughly 74,500 employees.

It’s not like Murren will end up in the poorhouse if he didn’t fill his wheelbarrow to the brim on his way out the door. Murren sold $22.2m of MGM stock in February, just before the share price fell 73%. Had he waited, Murren would have netted nearly $16m less. Kudos for knowing when to fold ‘em, we guess, but he added that stash to his already impressive pile a month before MGM agreed to pay his full exit package.

Keep in mind that this is a company that reaped a $1.4b windfall from President Trump’s tax cuts, which according to GOP dogma was supposed to result in MGM embarking on a hiring frenzy. Instead, MGM decided to trim 3% of its workforce, including replacing some bartenders with robots, while planning even more stock buybacks (until the share price crash nixed that plan).

The fine print on the federal government’s new $2 trillion stimulus package isn’t yet available, but it’s believed to have clauses that restrict any company from using bailout funds for stock buybacks or executive bonuses. Murren was among the industry reps who traveled to Washington to pitch Congress on a coronavirus bailout package and Bloomberg quoted some analysts musing about the timing of Murren’s exit possibly being aimed at evading any strings that might come attached to those taxpayer billions.