Poker Hacks: How to talk

Everyone knows how to speak, don’t they? Well, yes and no. While poker table talk has been an ever present since a spontaneous game on the Mississippi prompted a man wearing a pair of galoshes to pronounce himself all-in on the river to laughter, poker players have loved to chat. 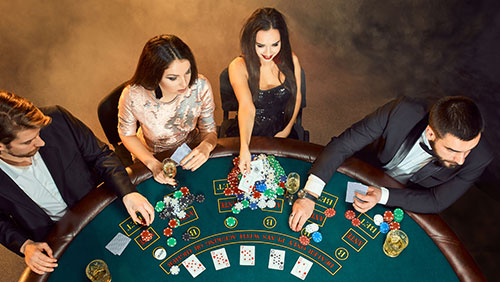 In this series, we’ve already helped you sort out your travel plans, dial up your diet and change your table image as well as helping you keep and eye on your mental health and sleeping patterns in order to put yourself in the best possible shape to succeed.

But what if you feel nervous about speaking at the table or – worse still – you’re only too happy to talk and what you say constantly gives your hand strength away? You could probably do with five tips on how best to express yourself at the felt.

There are any number of positives to talking about poker at the table, and there’s no doubt that table-talk is a good thing. However, while that’s true, there are also an infinite number of topics that might annoy a tablemate. Just like in poker, over the long term, it’s best to play the odds.

Politics is the first topic you should look to steer clear of. Whether you’re in favour of the red or blue party, whether you lean left, right or sit in the centre ground, it’s best to ignore political speech if you want to get on with your tablemates.

The same can be said for religion. Whether you’re a devout disciple of a particular religion or a confirmed atheist, your faith or the faith of others is often a subject that can rub people up the wrong way.

When it comes to what sort of table-talk you should avoid, consider how you might feel if you heard what you said and disagreed with it or were personally affected by it. In other words, don’t say to others what you might not wish to hear yourself. Respect is the watchword.

Locating an opponent’s common ground can sometimes be tricky to do. They are, after all, your opponent at the table and poker by its very design, sets you against everyone else – almost the diametric opposite of skilfully creating welcoming conversation. There’s no reason that you can’t get along with the player about to take your chips, or you theirs.

Find out about your new best friend by asking what brought them to the tournament, whether they qualified or not and how long they’ve been playing. Maybe they’ve been in the city you’re playing in for a week or have already lived there for many years and could help you acclimatise.

If you can help one of your new tablemates out with anything to do with the festival you’re playing at, then this can benefit you in a couple of ways. Firstly, you feel good by doing good – anyone does. Secondly, if there really is such a thing as Poker Gods, you better believe they’re watching at all times.

One topic that is great to talk about but also very difficult to get right is the immediate hand history of the tournament in question. It might be the most popular subject at the table, but anything you say isn’t just a potential social faux pas but could hinder your own chances of success at the felt.

Discussing the poker that you’ve been playing is fraught with complication. Even if you’re not in the hand, your opinion on how an opponent might or should have played the cards they were dealt could give away your own position. Of course, you could manipulate this to your own end, couldn’t you? By giving false information, you might buy yourself some credit for playing your own hands in a particular way. That might not last long, but it could be used to good effect.

The problem with discussing poker hands for any length of time at the table is that it can give away your own abilities, strategies and even desire in the tournament. How you play can reveal everything about how you play, so time it sparsely and be careful not to give yourself away – unless you don’t like winning money!

One of the easiest pieces of advice we can give is also one of the most important. Keeping table talk respectful and fun is a great way of keeping poker busy. It’s not only important for the reason of keeping poker players coming back to the table, but it will make your own experience that much more enjoyable too.

Being friendly with others should create a friendly table and players who are happy are proven to play more poker hands. You’re creating action by getting the buzz of being nice – it’s win-win.

At the poker table, everyone is an equal. It’s not always the way in life. There’s that person you know who had everything handed to them on a silver platter, while others you know might have had it really tough. Privilege, funding and other advantages mean nothing when you put your chips on the line in a tournament – you’re the same as anyone else.

This should teach us that life should sometimes be a bit more like poker – everyone is included and providing you can make it to the venue, no-one should be excluded due to race, religion, sexuality or style. Make sure that you include those around you and you’ll enjoy the game and maybe make some new friends in the the process.