After the success of Late Night Poker Season 1, which we also featured in this series, poker on screen got a whole lot more entertaining in Britain at the turn of the millennium as Late Night Poker returned. 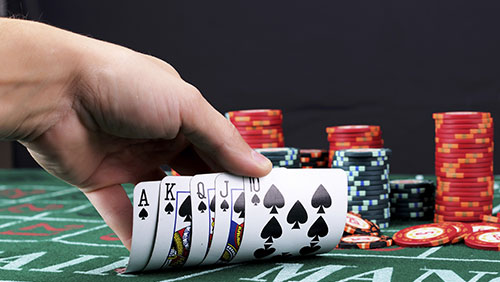 Season Two focused on many of the features that had made the first season so appealing to viewers. The lipstick cameras hidden under the table that showed fans the players cards before and during each hand, the lingering close-ups on hard-worn faces and smoky background shots that made you, the viewer, feel like the whole game was taking place in an underground bunker. Everything that fans loved was still in place.

The graphics, structure and tournament organization were all even slicker than the first series. A poker series is a little like a comedy vehicle that turns into an established sitcom, with Seinfeld being a good example of the comparison.

In the first series, all the characters have to be introduced and the chemistry discovered. By the time Jerry, George, Elaine and Kramer returned to screens, fans were familiar with their idiosyncrasies, as well as the sets, the timing and the energy. It was the same with Late Night Poker; if the feeling after watching the first series was ‘What the heck is this?’ in Britain, then upon the resumption of rivalries, there was a real warmth and welcome to proceedings.

As it transpired, the second series of Late Night Poker was won by none other than Simon Trumper, who won £40,000 by defeating Hendon Mobster Barny Boatman, who had to settle for just £13,000 as runner-up. Trumper, who now has a major role at Dusk Till Dawn Casino in Nottingham and has helped to revolutionise the British poker scene, was a ponytailed former car dealer in those days, as opposed to the bald impresario around which much of the drama at Europe’s second-largest card room centres.

Other players who returned included silent but deadly Midlands player Surinder Sunar, late Irish legend Liam Flood and the former platinum blonde and sorely missed Dave Colclough. Four other players who returned as a collective all out for themselves but with an eye out for each other were the Hendon Mob, a.k.a. Joe ‘The Elegance’ Beevers, Season Two runner-up Barny Boatman, his brother, the actor Ross Boatman and Ram ‘The Looks’ Vaswani.

In the second series to take place in 2000, the third series of Late Night Poker overall, Phil Hellmuth would be triumphant, winning £45,000 for his victory in the Grand Final, where he beat Adam Heller to take the trophy. Regulars such as Marty Wilson and Barny Boatman both made the final, with the format and series so established that, as the Hendon Mob would one day tell this reporter, players who didn’t want to give their secrets away by playing in the opening series were queueing up to be a part of the series now that it was successful.

Late Night Poker would return in 2001, where Phil Hellmuth would attempt to defend his title, but just as that is a story that merits telling independently, the series would take a new life of its own. We’ll revisit Season Four of Late night Poker at a later date.

As the Season Two winner Simon Trumper described, the show really was a groundbreaking moment in the history of televised poker: