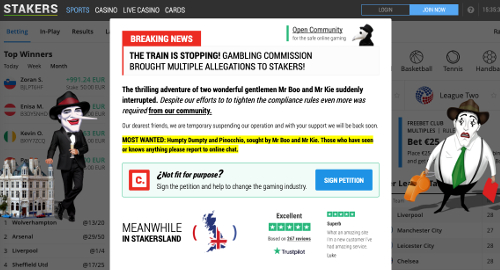 Online gambling operator Stakers is hitting back at the UK gambling regulator for suspending its license due to alleged compliance failures.

On Thursday, the UK Gambling Commission (UKGC) announced the suspension of the gaming license held by Malta-based Stakers Ltd due to what the regulator called “a number of compliance issues.” Stakers was ordered to limit its contact with UK customers to account withdrawals pending a review of the company’s UK license.

Most companies that have been subject to UKGC discipline tend to go quietly, but Stakers has chosen an alternate route. UK visitors to Stakers.com now see a pop-up featuring the brand’s two comic characters Mr Boo and Mr Kie – Bookie, get it? – and a message that their “thrilling adventure” had been “suddenly interrupted” and thus “the train is stopping!”

The message went on to say that “despite our efforts to to [sic] tighten the compliance rules even more was required from our community.” The site assured UK customers that “your balances are secure, withdrawals will be processed in the matter [sic] those are received.”

In what we suspect is supposed to be a dig at the UKGC, the site issued a cryptic “MOST WANTED” request for “Humpty Dumpty and Pinocchio, sought by Mr Boo and Mr Kie. Those who have seen or knows anything please report to online chat.”

The message also linked to a Change.org petition that seeks to declare the UKGC “not fit for purpose,” echoing recent language by the UK’s All Party Parliamentary Group (APPG) on Gambling Related Harm.

The petition wants the UK government to “immediately bring forward legislation to ensure the ever-growing gambling market it [sic] being properly regulated, consumers are protected and an Ombudsman is established.”

The petition was launched two days ago by an ‘Ojgen Lewit’ — which we suspect is an anagram for something, but it’s Friday and we’re already too soused to sort it out — and has so far garnered a whopping 40 signatures, so we suspect the UKGC isn’t exactly quaking in its boots by this mouse that roared.

While Stakers’ message to its UK customers declared that “with your support we will be back soon,” we suspect that Stakers has effectively decided to give up its UK ambitions and is Brexiting this market post-haste on a ‘you can’t fire me, we quit’ platform.