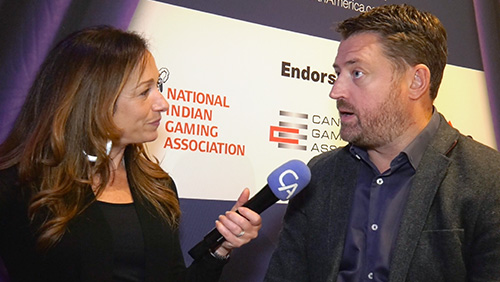 ICE has made quite an impact in North America already, having a very well-reviewed event in Boston. Our Becky Liggero Fontana caught up with Clarion Gaming’s Rory Credland, Event Director of ICE, to see what the event series had planned for the U.S. in the future.

We caught up with Credland at Sports Betting U.S.A., another Clarion Gaming event, and Credland was thinking ahead to the next ICE conference already. “I think certainly, if you look at the high caliber of speaker’s here, content is it’s very much a driving force, certainly at the moment in in the U.S.” he said. “So we’re certainly going to be applying that heavily to ICE North America, a lot of content talking about what’s going on the gaming market at the moment across all verticals. So its starting to play a massive part on that, and that’s probably one of the main thing that we’re bringing from here.

The next ICE North America won’t be returning to Boston, but instead will be held in Louisiana. Liggero Fontana asked why they made the change. “Well, I think, again we looked and talked to the industry did a little research post event in Boston, and we decided to move it south to look after the more land-based sector and the hospitality tech sector that we’re going after,” Credland replied. “And New Orleans has been a very vibrant city, we feel it’s a prime opportunity to bring everyone together more of the community to really lunch down and learn about gaming it in the U.S.”

New Orleans doesn’t commonly see a lot of conferences from the gambling industry, and Credland talked up some of the unique opportunities the location offers. “Well, it’s famous for its Mardi Gras and generally people having fun,” he said. “So we’re going to certainly bring some of that to the show floor, with a food in cuisine that we’re going to be offering on the show floor and just bringing the whole fun element of New Orleans to ICE North America, which I think is very key to really make sure that everyone enjoys a show, but also has a good time, which is what New Orleans is all about.”

While Sports Betting U.S.A. offered a great look at the growing U.S. market, Credland emphasized that there is so much more to take into account, and that’s where ICE North America will shine. “I think, obviously, we will certainly be covering sports betting at ICE North America, but also we focus on there on the hospitality tech, which is playing quite a key point, key part of the industry at the moment,” he said. “ICE North America is really about the present, but also about the future. The future of gaming and the future of sports betting, future of esports. So we felt it necessary to bring all that industry gathering together to talk, debate and interact with one another as a whole, so it should be exciting show for us all.”