GrooveGaming backs Fire&Ice Party for the future of iGaming.

Tuesday, January 28; 2020, Malta – GrooveGaming are sponsoring the historic Fire&Ice party ‘Rhythm & Beats’ on Wednesday February 5 at Troxy to get the party started in the iGaming industry for the next decade along with sister slot-maker Fugaso. The rapidly expanding GrooveGaming are proud to sponsor this iconic event in London’s East End during ICE2020 to host all their friends in the iGaming community to a great night out! 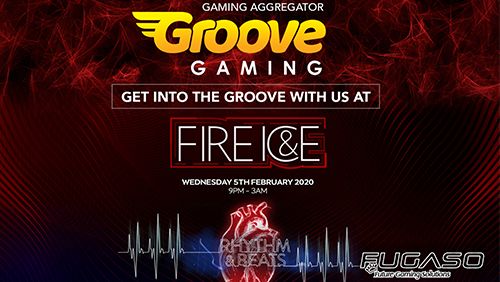 Fire&Ice is the most anticipated event in the igaming social calendar and the largest social igaming networking event. Held at the iconic Troxy in East London, the Art Deco building will welcome 3000 igaming elite for what promises to be the night of the year for all GrooveGaming and Fugaso partners and friends. The party provides a distinctive networking atmosphere allowing attendees to network with great minds in the iGaming business. This event is held every year during the same week as the London Affiliate Conference and ICE Totally gaming.

GrooveGaming has been attracting attention for all the right reasons over the past year, with a meteoric rise that has snowballed into 2020. Created with the aim of easy and fast content delivery for the iGaming industry, GrooveGaming powered ahead in 2019 as the aggregator of choice for a host of big industry names including EveryMatrix, iGP, Digitain, ALEA and Quickfire, amongst others, and with over 2500 casino games available on the platform and a series of aggregated content added to GrooveGaming, operators are able to find the instant integration that has a wealth of curated content to drive player engagement and revenue.

The world’s fastest-growing aggregator GrooveGaming has been in top gear developing powerful market positions in Europe, the Far East, Latin America and Africa, as well as focusing on the technology development that has set the accelerating aggregator apart over the last 12 months. GrooveGaming has carved out a significant space within Europe’s regulated gambling markets, and a recent announcement about a new partnership with Super Spade Games has given a boost to its Far Eastern ambitions, while deals with Jazz Gaming Solutions and Patagonia Entertainment has bolstered its growth prospects in the Latin American market.

GrooveGaming’s global reach is underpinned by tailoring games lists and promotions for operators working in multiple markets to reflect typical regional player attitudes thereby helping to drive player engagement and revenue. A key reason why GrooveGaming is becoming a supplier of choice around the world is that GrooveGaming is powered by technology innovation which provides operators with the ability to activate a range of features that enhance customer experience and engagement, improve retention, encourage extended play and produce higher yield.

Fugaso, who recently celebrated their third anniversary, is also on a roll, having recently been announced as a finalist in two AskGamblers Award categories which play to the company’s strengths, Best Slots and Best Software Provider, in what is considered the world’s most prestigious casino awards.

Robert Metzger, Head of Business Development at Fugaso said: “Building an emotional connection to customers is at the heart of slots development, so we are proud to support this year’s Fire & Ice party to take the industry into the future.”

Rebecca Sotomora, Head of Sales at GrooveGaming said: “This is an opportunity to host our clients and suppliers at the industry’s most famous event, and a way for GrooveGaming to meet and entertain clients, affiliates, media and all key igaming stakeholders in a fun and relaxing environment with a full evening of partying and entertainment. We look forward to making lots of new friends!”

Offering an extensive game library of over 2500 HTML5 slots, table games and video pokers, Groove Gaming is headquartered in Israel and holds licenses issued by the UKGC and the MGA. Groove Gaming was founded in 2016 by a group of professionals who all had the dream of creating an exclusive service so entrepreneurs could meet the growing gaming needs of the world. Expert managers control financial transactions with accuracy and foresight, and Groove Gaming’s top-notch customer service rivals, and in most cases beats, most multinational companies operating today. With integrated multiple streams from today’s top providers Groove Gaming powers market access with industry heavyweights.