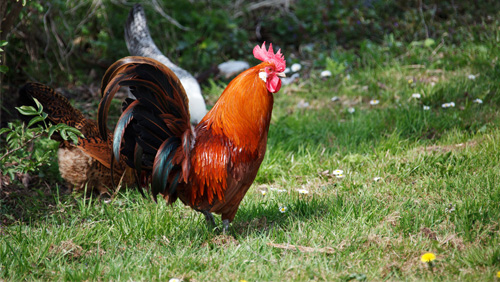 In a bizarre accident, a man was killed at a recent cockfight in the village of Pragadavaran, India. According to reports, the man suffered a deep stab wound from the sharp-edged blade attached to the rooster’s leg. According to law enforcement officials, while one of the organizers was holding the rooster in his hands waiting to release it into the arena for a fight, the animal began to flutter violently, attempting to escape from his grasp. During the melee, the sharp blade pierced through the abdomen of a punter, 55-year-old Saripalli Venkateswara Rao.

He was taken by transport to the hospital in Chintalapudi. The injuries were so severe that they caused him to bleed out and die. Police have now registered the case and the body has been sent for an autopsy.

The practice of attaching blades to the leg of the rooster is typical in cokcfights, and is the case in Chintalpudi, a region in the West Godavari district. There is often a lot of money wagered on these fights, and organizers want to ensure that there is an obvious winner to any contest.

Cockfighting has seen a rapid increase in India in recent years, especially as the Hindu festival of the Sun is approaching. In spite of the fact that the Supreme Court has declared this sport as illegal under the Prevention of Cruelty to Animals Act, 1960, and the Andhra Pradesh Gaming Act of 1974, it is still grown at a nearly exponential rate.

Adding to the problem is the fact that many local politicians are involved in the sport as well, Coupled with large the sums of money involved, it is becoming a problem to try to curb these contests. According to reports, this has led many law enforcement officials to turn a blind eye to the practice.

It is believed that in the three days surrounding the January 15 festival, more than R100 crore ($14 million) was wagered in the Indian state alone. Animal rights advocates have been calling on police to take a more active role in preventing these activities, but a 2017 case before the Supreme Court seeking to push the government to take more stringent action was dismissed.

Andhra Pradesh hosts one of the largest cockfighting events in India each year. In 2019 it was estimated that 1000 people attended the event which is organized by the MLA, a member of the state’s legislative assembly.

While it’s unlikely that illegal cockfighting will ever be completely stamped out, as its become part of the local culture, one has to wonder if Mr. Rao would be alive today had India made more legal and safe gambling options available to him.