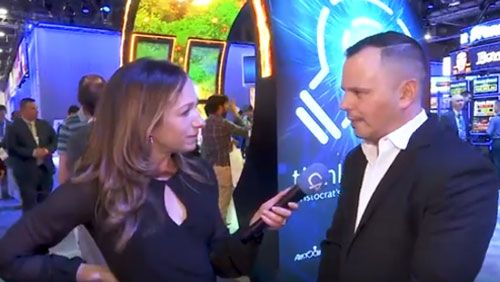 It was obvious to all who attended G2E Vegas that Aristocrat had created something special in the Hyper Arc. Such a beautiful machine could only come from a company that fosters creative thought, and Vice President of Corporate Innovation Roberto Coppola joined our Becky Liggero Fontana about the culture that allowed it to happen.

The beautiful arc of games Aristocrat brought to the G2E Vegas floor came together fairly quickly, and it’s something Coppola was quite happy about. “We’re so proud of the Hyper Arc, and the innovators behind Hyper Arc for a number of reasons,” he said. “First and foremost, we have some very innovative people throughout our company who are passionate about how can we extend our current Arc product, and how can we add value for our customers. And we got behind it, we funded a little prototype, and here we are today. In two months, they went from a little duct-tape and spare parts to this beautiful concept you see here.”

Liggero Fontana noted that there could have been a lot of roadblocks to the Hyper Arc’s creation. “Some of your most successful, promising, entrepreneurial people within an organization who are passionate about something, you have to be in their corner,” Coppola replied. “You have to be supporting them, you should be the last person to say no, in fact, you should never say no to an idea from someone like that. So championing their ideas, getting behind their ideas, finding the person who could say yes, which in this case was Joe Kaminkow, that was what really got the ball rolling for this project.”

In his talk at G2E Vegas, Coppola noted that children can be an invaluable resource for new ideas. “Toddlers, young children don’t have this negativity bias, this filter that we have as adults,” he added. “Very applicable to innovation. Innovation needs to be about how can we, versus knee jerk reaction to no. Kids don’t have that filter, I spend time with children, talking with children, I have a four year old of my own, and I’m always observing and learning from them and their optimistic attitude. Very important.”

That being said, Liggero Fontana asked if Aristocrat has a strategy to bring in the elusive younger player. “I would say, not necessarily younger people, I would say one of the challenges we face as an industry, as a company, how do we create new players, how do we get new people interested in our products regardless of their age,” he responded. “Now granted, a lot  of them will be ‘younger,’ but even someone who’s maybe 50+ and who’s not currently using our products, that’s an opportunity for us as well too. So we’re not hyper focused on the age aspect of that, more about the psychographic aspect.”

Finally, Coppola was asked what Aristocrat is focusing on in the near future. “So we’re issuing challenges throughout the business on a year-round basis, so stay tuned and a lot of great things to come.