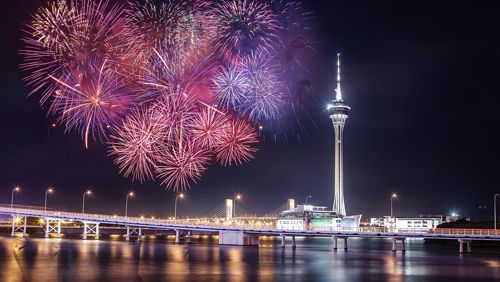 According to police, over 39.4 million tourists arrived in Macau during this past year. Also included in the report was the fact that 28 million people came from mainland China. Other regions that commonly sent tourists to Macau included Hong Kong, Singapore, Indonesia, the United States, South Korea, Taiwan, Japan, Australia, the Philippines, India, Australia, and Thailand.

The increased number of tourists was a great sign despite the fact that the total number of hotel rooms available was down slightly. Despite the fact that new hotels have opened in the city since the end of 2018, total room occupancy decreased by 1.7%. This was attributed to the fact that many renovations have been ongoing throughout the area, with several close to being completed.

Currently, there are 18 hotel projects that are under construction or renovation, with 24 future projects slated to begin sometime this year. That is expected to add an additional 11,000 rooms to the region. Most of the renovations are expected to be completed during 2020.

It was hoped that the city would see 40 million tourists in 2019, but a combination of factors seems to have stood in the way of them reaching that number. This includes the US/China trade war, as well as a weakening Chinese economy. The political turmoil in Hong Kong has also been a factor, as tourists from this region saw a sharp decline over the last six months.

This year could be an even bigger one for the city. With an initial agreement reached between the United States and China, this should have a dramatic impact on the economy of China as the trade war looks like it is now over. In addition, a recent study found that 70 percent of tourists who had visited Macau from India fully intend to return. In addition, 96 percent said they would recommend the city to friends and family.

Over 120,000 tourists came to Macau from India last year. Should the numbers revealed in the survey proved to be true, it would be likely that the 2019 number will be significantly dwarfed by the tourist numbers for 2020. There clearly appears to be a lot to look forward to in 2020 in Macau.