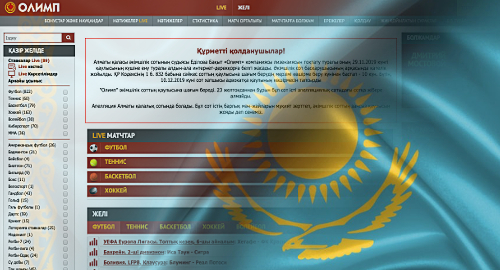 On November 29, a court in Kazakhstan’s largest city Almaty ordered a six-month suspension of the betting license held by Only Bet LLP and Alpha Bet LLP, which operate in Kazakhstan under the Olimp brand.

The Cyprus-based Olimp operated both land-based and online sports betting in Kazakhstan but the Ministry of Finance reportedly suspected the operator of “potential concealment of taxes” from its online betting business and the subsequent transfer of revenue earned via the site out of Kazakhstan.

While Olimp’s betting shops closed their doors, local media reported that the Olimp website continued to process wagers for Kazakh bettors a week after the suspension order. The Olimp site currently displays a message to bettors that the information provided to the media by the National Security Committee “is not true.”

The message goes on to say that the court order “has not entered into force” and that Olimp intended to appeal its “illegal” license suspension at its next opportunity for a hearing on December 23. Until then, the company maintains that it’s business as usual.

There are a number of bookmakers plying their trade in Kazakhstan, most of them familiar brands to Russian bettors, including 1xBet, Parimatch, Tennisi and Zenit. Olimp is far from alone in butting heads with Kazakh authorities, as local operator Profit Betting was forced to close some of its betting shops after the company’s founders were detained for questioning in October.

Kazakhstan’s government has been mulling a revamp of its gambling market for several years now in a bid to rein in the bookmaking industry, which reportedly boasts three unauthorized betting shops for every one approved the government. In the meantime, the upheaval has left some rank-and-file bettors without the means of withdrawing the funds from their accounts.